Man o’ man, the last couple of weeks have been a ride!  I am working two jobs now, you see.  I took two part-timers in order to make a whole, as it were.  However, one part-time gave me nearly full-time hours last week, so I was somewhat working a full job and a half.  Often, both places in one day.  13-hour work days!  Changing in the bathroom of one into the uniform for the other and dashing!  (Where is my Superman phone booth?!)  I am not complaining, and would certainly never turn down the hours.  Need all the help I can get!  But, that is just an explanation of my absence here (and out in the world too) since the working-hours-earning-pay rollercoaster took off at full speed.  THIS week (and going forward, I hope I think) my schedule is starting to balance out.  One place a day, at a time.  Balance is good, as it means I can do Other Things aside from working and crashing out and getting up to do it all again.  Hurrah!  I am enjoying both places, though, I must say, despite the wild hours and the hurty feet.  Learning a lot, meeting some really neat folks.  So it is all good.  No matter what it throws at you, Life is always an adventure.

As usual, I digress.  Today, I want to remember and share the small ritual that J and I performed on the Thursday prior to leaving New Orleans last month, as it was important to us, and is important to us still.

Feeling doldrumy and sad and, I think, a little panicky about our ever-nearing departure, earlier that week, J suggested, quite out of the blue, that we have spaghetti for dinner one particular night.  “Why?” I asked.  “Because we need the jar,” was his logical reply.  The goal being to go to the Mississippi river and collect some of Her to bring back to CO with us.  To keep Her close, until we got back.  I am a firm believer in the notion that bringing a piece of a place away with you keeps that place close.  So it sounded like a mighty fine damn plan to me!  So, we ate spaghetti.  I de-labeled and cleaned out the jar.  And then, that last Thursday, with jar and one egg in hand, we made our way to The Fly or, officially, Avenger Park.

The Fly is a really neat place.  A park nestled along the river behind Audubon, it is a beautiful place to stare at the lazy water ambling by.  The Moonwalk at the foot of the Quarter is, too, and THAT view is breathtaking with the bridge and the skyline.  But this one is just as equally satisfying, in that it feels more…nature-y, in a lot of ways.  If you angle your view just right, you cannot see the traces of Industry.  Just water and trees.

Our first challenge was finding the place again.  One day, we had been out and about Uptown, seeking For Rent signs and furthering our exploration of the area, when we managed to make the right turn at the right time and land ourselves at The Fly.  Actively seeking it out, this time, was a bit more challenging.  We kept getting close, only to be thwarted by a hospital or a non-through road.  Finally, we found ourselves on the correct street (we knew it by the tree that was nearly growing in the middle of the road) and, excited to have finally discovered our destination, were thwarted once again by the fickle touch of timing.  And thus there we sat, for a spell, watching a train go by. 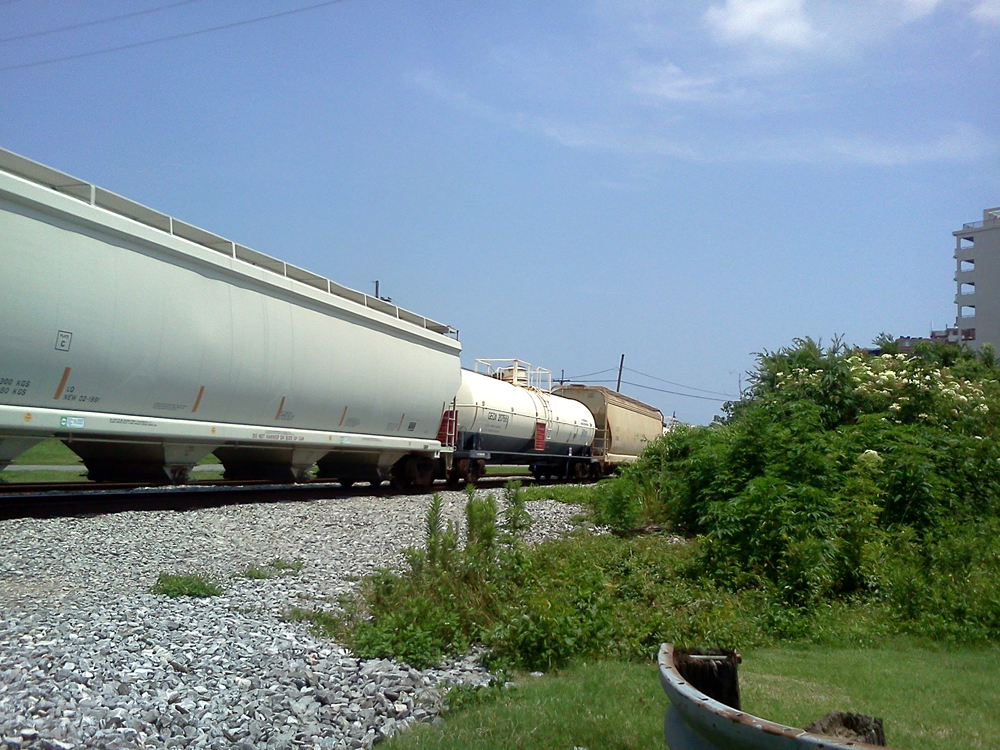 At long last we made it.  After all the driving through the twisting and wending Uptown-Behind-Audubon-Park streets and the delay by the train, I was hopping up and down fairly badly.  Back teeth a-floatin’, as it were.  So, before we struck out on foot in an attempt to actually Get to the Watah, I made my way to the public facility, whereupon I saw some pleasantly fun graffiti on a stall door.

Thusly relieved, we took a little time to enjoy where we were.  To look around and See and soak in.

And then it was a matter of actually getting down to the shore.  No easy steps in sight, anywhere, we found this opening and decided to climb down.  After looking around to see if anyone was noticing, of course.  I am not entirely certain one is supposed to climb down there.  But it was the middle of the week, people were sparse, and we were on a Mission, by golly.  So climb, we did.

I now understand the concept of evil creepy vines that reach out and grab you.  That green groundcover there was all vine, and as I sneakily hiked my way down it kept making wicked attempts at wrapping around my ankles.  I caught it every time, shook the plotting plants off, and thusly made it to the bottom unscathed.  Whilst carrying an empty jar with a fragile egg inside of it.  Perseverance!

Bearing in mind the warnings from Cootie via email, prior to this venture, of sinking muddy quicksandy holes that can drag you to your doom, I was content to note that, here at least, it was all rocky and solid.  Whew!  And so I stood there for a moment, enjoying my very first moment of actually standing BY the Mississippi instead of looking at it from atop a levee, of being able to reach out and touch the water. 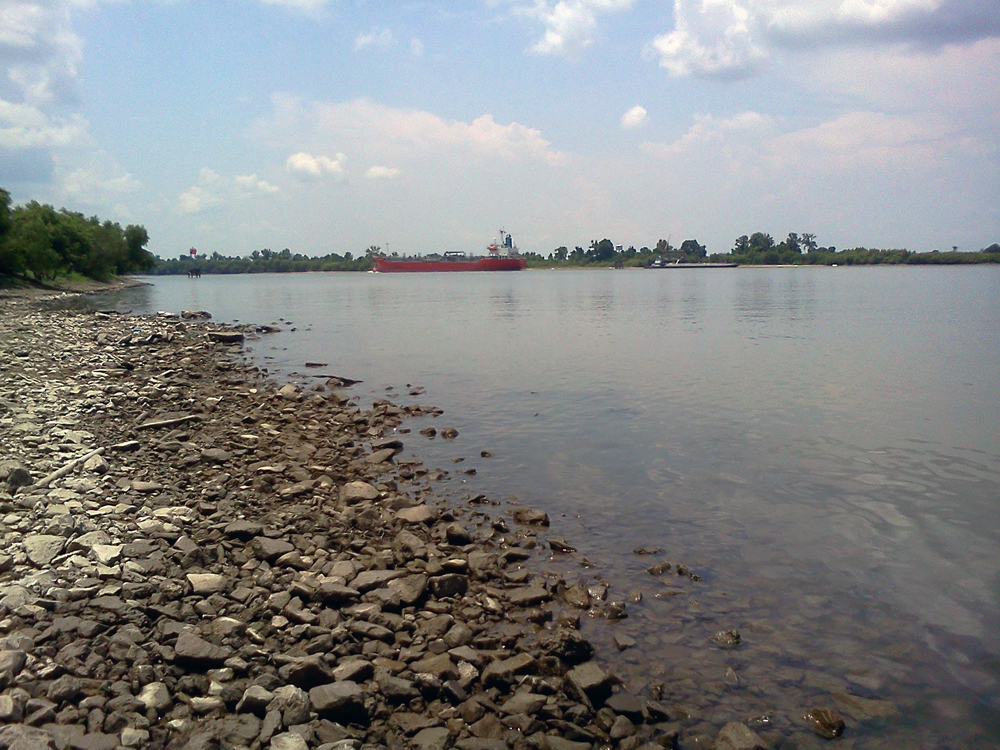 And then it was time to Get It Done.   J scooped up some watah.  And then I tossed the egg in.  I am not a fan of taking, without giving something back.  Poking around The Room in a search for what I could offer, the egg felt right.  Birth, rebirth, newness.  Damballah.  World egg.  And, it was a natural and biodegradable (or edible by critters perhaps) item.  No harm, no foul.  Of course, it hit the water and broke, instantly.  Which was also kind of cool.  A dispersement into the water, a spread, like roots.

And thus, we had ourselves another mojo jar.  Roll us back swift and sound, Mama Watah.

We packed that jar carefully in preparation to hit the road.  It made it, safe and sound.  Now, it sits on the shelf next to my side of the bed.

On the very right, there.

I hold it frequently, stare into it a lot.  It is a reminder, sometimes, of why I am working two part-timers that occasionally turn into full-and-a-halfers.  Of why I often easily ignore the aching feet and hips and back from being on my feets all the time, a shock after sitting on my arse at a desk for 11.5 years.  Why, no matter how exhausted I get, I always embrace the hours of work as a means of being afloat and of restocking further means of being afloat once we depart again.  Why I have my head down and focused.  Paying my dues.  Stashing up.  Rolling on.