The Royal Pharmacy, which crouches on the corner of Royal St. and Ursulines in the French Quarter, has rather an aura of Landmark about it.  An aura of “I have always been here” and, really, that is not entirely untrue.

From what I have been able to discover thus far, the property has been a pharmacy in one form or another for approximately 100 years, and run by the same family in its current form since the 1930s.  I suspect that walking through their front door would be a bit like stepping into a time machine.  While continuing to offer those things that a pharmacy or corner store provides, it also carries with it a certain amount of historic preservation.

I would not know, however, and herein lies my mystery:

Although operational hours posted online in the Yahoo directory proclaim that they are open “Sunday to Saturday, from 9:00 a.m. to 6:00 p.m.,” I have yet to experience that this is, indeed, the case.  Many hours have I spent, on foot in the French Quarter, and many times have I passed the Royal Pharmacy in hopes of at last discovering that the sign on their front door would read, “Open.”  These moments of passing by have been varied, to be sure.  Different times of day and evening, sundry days of the week, over a course of several years, beginning in 2008.

Utilizing my internet tools, I struck forth to do a bit of research.  Information has been limited.  A phone number, hours.  The small piece of history that I was able to glean about its age, I discovered in a review on Yelp dated 2008.  The most recent mention of them there was in 2011.  Otherwise, I have turned up nothing.

At first, as a visitor to this fair city, I felt that perhaps my holiday-limited amblings kept me from arriving at just that right time, that right moment.  Say, when the clock strikes 13 and the sun and moon caress in the sky over the duck, which previously squawked at dawn.  Now that I am here to stay, I have spent far more varied time in the Vieux Carre, and have found myself guiding us, en route to Elsewhere, past that corner.  Just to check.

I fear that, over the years, it has become an obsession.  I am not seeking any particular item, nor do I drastically and tragically need the pharmacy to be open.   Rather, I simply wish to one day step inside, like a runner crossing a finish line first to collect their prized trophy.  This is why I’ve not committed the mundane and simple act of merely calling their listed phone number to make an inquiry.  Why, that would ruin the mystery a fair bit too easily, would it not? 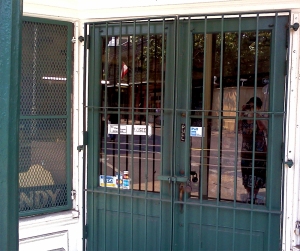 O’ Royal Pharmacy!
Why hast thou locked thine
Very gates against me?

I would be grateful and interested, should a New Orleanian happen to pass this way, and enlighten me.  Just a little.

Until then, a Royal Mystery as yet unsolved.