It was with much geeky, superheroic glee that J and I leapt and bounded our way up the street to the movie theater today to see the Avengers.  YAY Avengers!  The film is phenominal and most definitely does not disappoint.  Keeping tabs on all of the films leading up to this point was very much well worthwhile, and the refresher we got this week made it all the richer.  During the course of the week we watched as many of them as we could: both Iron Mans (Men? Menz? Heh.), Hulk, very definitely Captain America, which is my favorite…alas, we could not get our hands on Thor, but as we saw it recently, prior to moving, that was alright.  But it was fun, spending the week catching things we’d not noticed before, piecing it all together, all of which culminated today for the Avengers.  It was fantastic, seeing them all together on screen at last!

My thoughts were with my own Super Tribe, though.  A bunch of them did a marathon thing yesterday, and it made me smile to think that the team has NOT been divided upon our departure.  Rather, we’re just taking over and spreading the geek out.  😉

So, you know.  This is actually less of a film review, and more of a hearty and joyous shout out from Catwoman and Batman to: Batgirl, Iron Man/Superman/Nightwing, Cappy America, Green Arrow, Flash, Black Widow, Black Canary, Harley, Joker, Ivy, Bruce Banner, Beast, Supergirl, Zatanna, Scarecrow, Wonder Woman, Jubilee, and Spider…to name a few.  May we all suit up and take over again, someday soon. 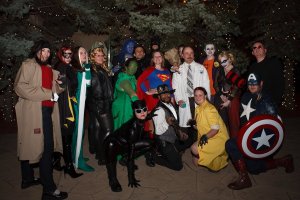 On a side note, can I express how grateful I am that New Orleans Comic Con is at the end of November this year?  The weather is such here that, as beautiful as I think heat and humidity are…you couldn’t pay me to get into that catsuit right now.  Hahaha, haha, ha.  😉

Featured Image: J and I, Batman and Catwoman.
Photo taken by my favorite Black Widow, Angel; Photoshop work by myself.