I never know what’s going to happen when either I or J suggests to the other, upon having had enough of The Room, “Hey, wanna take a drive?”  We do this occasionally, get in the car and strike out for destinations unknown.  It is, save for a little bit of gas, the most cost-effective form of entertainment we’ve got, and gods know there is plenty to explore, being the new kids in-state.  Last time, we landed ourselves on the Northshore.  THIS time, not only did we have cabin fever, but we could tell that the Dawg did too.  So, J, Toby, and myself hopped in the car, went east and, eventually, found ourselves wandering into Mississippi.  The main endgoal being to just cross the border for the heck of it but, upon doing so, it occurred to me that, “Dude, if you go just a little further, you’ll finally be able to see the coast.”  So, we hit Bay St. Louis for a few minutes before turning around and heading back, as the day was growing late.

As the Gulf Coast came into view, I found myself doing a little reflecting upon timeframes, and realized that the last time I had seen the Gulf Coast was when I was 15, doing volunteer work at the marine biology center in Biloxi, MS.  And this meant that I had neither seen, nor touched, my Gulf Coast in TWENTY YEARS.

Twenty years.  Good lawdy.  I about fell over when I realized that it’s been THAT long!

For that matter, I’d not touched ocean of any sort in at least 7 years.  Which, in and of itself, since I love oceans so much, is just too, too wrong.  I have missed greatly the sound of waves hitting shore, and the smell of sand and brine. 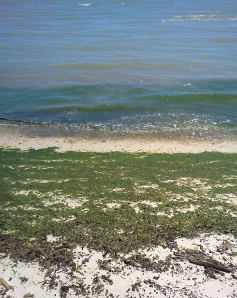 I believe this was J’s first time at an oceany beach, so the day was monumental in many ways.  All the more fun was Toby, who DEFINITELY had never seen ocean or waves before.

He was not too sure of the whole thing, and seemed rather daunted by the tide…regardless of the fact that the waves were very much shorter than he is.  He would run up and check it out, then run back when a wave rolled in.  It was pretty hilarious.  We managed to get his toes wet and his butt sandy, but that was as far as we got!

He was having none of it!

And he certainly couldn’t figure out why “Mommy” had her feet in it.  My feet, though, were rather happy at splooshing around in the Gulf again. 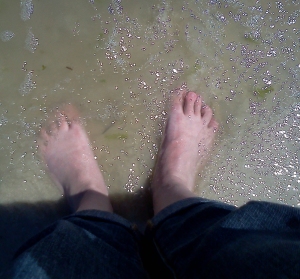 And, that was it!  Just a brief field-trip of the random, adventurous sort.  😉

Featured Image: A Boy and His Dawg