You know, sometimes you’re not out and about exploring your terrain and having new exciting adventures to write about.  Sometimes, you’re in The Room because, you know, it’s getting close to some sort of reasonable bed time and, as you’re settling in for the eve, the dog decides to Be Cute At You.  So one must document, despite the low light and lack of flash.  And quickly too, lest he move again, thereby annihilating your chances of a Cute Dawg Shot.

I’ve not had much to report of late, at least not in an immediate sense.  I’ve had interviews with two more potential places of employment, and am now back in the Waiting Game.  Meanwhile, J is out doing a trial run for the next couple of days for a place…instead of hiring someone based on their ability to sit there and talk about how great they are, they want to *see* it instead.  He gets paid for his time, which is handy.  So, he’s out technically Working for a couple of days, at least, a turn of events that finds me here in The Room somewhat enjoying the first long stretch of Solitude that I have had in over two months.  Hence, here I am, as I have this backlog of shots that I’ve taken over the last couple of weeks, and figured I would spend some time messing about with them, and doing some writing, lest the Universe begin to think that I have fallen off of it.

So, when one has two cute (albeit poorly lit) photographs of one’s dog being cute in The Room, one must share them for posterity. 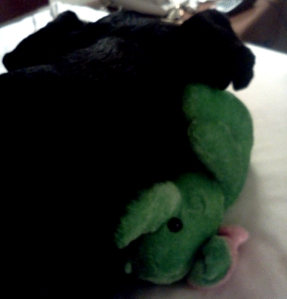 With his Easter parade catch, The Oliphant…still, a month later,
his favoritest toy EVER OMG.

So there ya go, gratuitous cute dogness.  Now to see what else I can dig up.