I seem to be having more adventures that I can write about in a timely manner.  Of course, the hotel having a busted wireless modem didn’t help, or else I would have been all tidily caught up by now…I have been internetless for days.  Today, it occurred to us that I could freely network in from my own phone’s wireless connection.  Hindsight, 20 20, all of that.

At any rate, I have been reading about the French Quarter Festival, and oogling photos, for years.  YEARS.  Oh, someday! I would think to myself.  Someday I will live there, and finally be able to go!  That Someday was this past weekend, and it was incredible!  I wish we could have gone for more than one day.   However, despite the fact that all of the music at all of the stages is free, parking is not (shuttle or no), nor are the foods and beverages.  So, we picked Sunday to go, as there were a couple of shows taking place that we really really really wished to see.

We made it to two out of the four that we had picked.  Some days, when you step foot into the French Quarter, your well-laid plans go awry and you end up going with the flow.  In our case, two of the acts we wished to see were spread out fairly far from the other two, so we stuck close and filled the rest of our time with eating, drinking, and wandering.  Oh, and sweating.  Which was alright by me!

We got over there in the morning while things were still being set up.  The day began with scoping out our first stage, so we’d know where to end up at, at the right time.Then, we did some ambling, and while we were ambling, the Calliope of the Natchez rang out through the Quatah, to start off the Fest Sunday.  This, of course, veered our ambling feet over to the river for a view of the beloved vessel.

Then we wandered back to Royal St. a little early, to the stage in front of the Courthouse.  I snapped a shot of the building between the two stages, and was amused by the light!

The holy light of JUSTICE!

We made it just in time for that stage’s first act of the day, which featured students from the Don Jamison Heritage School of Music.

They started off their set with St. James Infirmary, which immediately earned my undying love.  I love that tune.  It is one of my favorites!  It was amazing to watch these kids, this next generation of New Orleans musicians and performers.  And such talent!  I was impressed.

Then, next up was the Potent Bathers, with Beth Patterson!  I adore Beth Patterson, love her music.  This band is a separate project for her, and they were so much fun.  Their style changed from funk rock to reggae to ska to to to…definitely a good dancin’ party band, and no mistake.  Plus some pertinent songs in there, too, about heavy topics ’round here, which I thought was great.  Every once in a while they cut Beth loose to rock out a little electric ‘Zouk, which was fantastic.  YAY Beth!

I wish I had made it to the very end of their set, as I would have loved to have finally met her.  Unfortunately, it was a time of day where Royal St. was gettin’ NO shade, and I lasted all the way up to the last song and was starting to feel a little sway-ey and sun-laden, so we trundled off to Pirate’s for a seat in the shade for a little while.  I have radar about where she’s playing out and when, though, and since I “ain’t goin’ nowhere,” I will shake her hand someday soon!

En route to Pirate’s in the search for a shady chair, we swung into Fleurty Girl to see what was up.  They were handing out free “fans for their Fans” which was such a complete and total lifesaver!!!  Neither one of us put our fans down for the entire rest of the day!  I also purchased a bar of the most excellent Absinthe Soap that they carry, it is fantastic.

J is a Fleurty Girl too!

After a brief and refreshing sit-down at Pirate’s, it was time to venture into Jackson Square for some foodage and scope the terrain, as that was where our next must-see for the day would be playing.  We ate some chicken grillades with cheesy grits (YAY CHEESY GRITS) from the K-Paul booth, and I think I could now eat that every single day and be a happy camper.

And then we procured a couple of daquiries, a good, cold adult beverage. 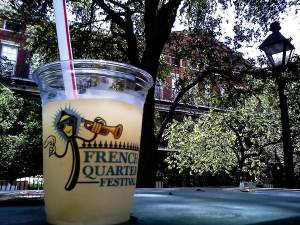 And whiled away a moment or two, taking in the whole scene. 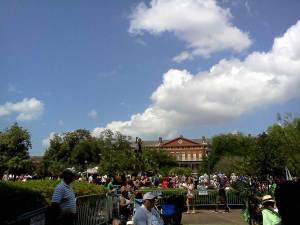 And then, then then then, it was time for Big Chief Bo Dollis, Jr. and the Wild Magnolias!  Yippee!  Now, I’d been following news and fretting about Big Chief Bo Dollis himself, and all the health trials and tribulations he’s endured, for quite some time.  His son, though, could sure put on a show up there, he was so incredible, and with so much energy!!!  So much family up there, and the music is like…like…Indian meets Funk.  SO MUCH FUN.  And pretty.  Ya can’t forget Pretty. 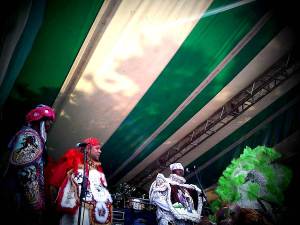 I can’t wait to see them again.  And the end of the show made our day, when Bo Jr. introduced us to Big Chief himself, who came out and sat at the front of the stage, and finished out the last of their set.  Despite whatever setbacks he has endured, he could still bust out some song, and even just sittin’ there on that stool, that Big Chief presence STILL emanated out over the crowd.  I even had the Tears of Joy thing going on, dancing all the while.  Amazing, amazing show.

After that, we were spent!  It was time to visit the food booths again.  We both got the crab-stuffed mirlitons with shrimp creole sauce from Tujague’s…J ate most of his AND mine, because I just couldn’t do it.  The shrimp/sauce was good.  The mirliton was prolly good…but the crabmeat was too potent to me.  NOT TUJAGUE’S FAULT.  I’m just sensitive to the flavor of crabmeat, which is why (as I think I have mentioned before here) I’m particular about where I go for crabcakes when I get a hankering.  So, live and learn. 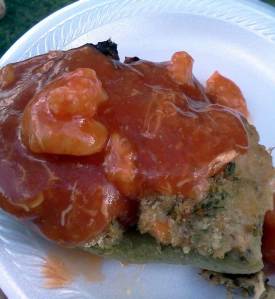 I DID eat every single shrimp offa there, though!

And then we rounded out our now-evening back at Pirate’s, said hi to some folks, and then came back to The Room to nurse our sunburns and crash out.

What a great day, I can’t wait for next year!  I am so happy that I am here.