Coming to New Orleans on vacation and staying in the French Quarter and relying only on your feet and the streetcars is one thing.  Driving into it and finding a place to park is quite another!  Needless to say, when we went down to the FQ that first Friday in town, it was a very different experience to have a vehicle.  Not problematic, though.  J drove THROUGH the Quarter just to do it, and after living in Cap Hill Denver for so long, the narrow streets and navigation were pretty easy.  Parking was an eye-opener that first evening.  Since then, however, we’ve found our reasonable spots, and it is all good.

At any rate, we approached the “schedule” of one of our Quarter evenings as we’ve always had when just visiting.  Our route has always just been tradition, so we kept to it.  First off was a big old splat with a Mint Julep at Pat O’s.  We proceeded to converse with our bartender, who gave us a permanent welcome when he found out we were there for good.

Next up was Lafitte’s.  In wandering over there, we both realized that it really felt like we’d never left the city, from the last time we’d been there.  The difference now was this slow-sinking-in joyful sensation that this time, we didn’t have to leave again.  It was kind of wonderful.

Anyway, it was only a matter of seconds at Lafitte’s before Our Table cleared and we were able to snag it.  That always makes us happy. 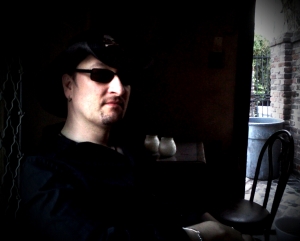 J, before we moved down a spot to OUR spot.

While we were there, our irish pirate buddy came through on a pub crawl.  I had totally forgotten that NOLA Pyrate Week was going on, and there we were with all our gear in storage!  How naked did WE feel?  At any rate, J stepped outside to meet him and I peered out the window to watch.  He had no idea we were coming back into town, let alone on a permanent basis.  So I watched him give J a big ol’ hug, and then saw his jaw hit the street when he found out that we were HERE here.  Then I came out and there were hugs all around and much joy ensued.  Apparently, since we’d been down for two Halloweens in a row, we were EXPECTED by many to be there last year.  That felt good.  After trying to come up with a Haul Away Joe verse about Jean Lafitte (heh!) he had to amble on as he was leading that shindig up the road.  J and I proceeded to take a nice slow stroll around, ending our trail at Pirates Alley Cafe.

No sooner had we settled into our seats there, then around the corner came our other friend A, who also had no idea that we were there for good.  We met her at Pirates Alley in 2009, on vacation, so us turning up suddenly once a year had become a norm.  (Save for “Where were you for 2011 Halloween?! of course.)  She ran up to us and I started bouncing up and down, saying, “Ask me how long we’re here for this time, ASK ME!”  It was awesome.  We started talking about jobs and work and stuff – on a whim, I asked her if she had any shop openings.  She did not. However, she proceeded to ask me if I knew anything about Graphic Design.  I have a degree in it.  Long story short, I am now doing some freelance work for her for the next run of tshirts for her shop.  Holy canoli, paid for art?  That is fun? For a shop and a spiritualism that I love?  Not too bad for a first night out. Still working on the pieces in and around job hunting and other acclimation things.  It’s pretty cool.

I think we, unfortunately, baaarely missed crossing paths with B that night, but we have hooked up since which is awesome.  We’ve also spent enough time hangin’ at Pirate’s that we’re starting to be familiar faces, and have met a lot of great people in passing.  The tour guides all look familiar when  we pass by the groups, for example.  That’s pretty cool, too.

That next day, Saturday, we went to the CBD to set up a P.O. Box (yay for having some sort of address), had lunch that was transcendent enough to warrant its own separate blog entry (coming soon), and then went back into the FQ for some errands of a fangly nature.

I finally got to say my permanent hello to my river that day, it was nice to sit and watch the water for a while.  Eventually, we heard the “shoe shine guy” coming, so we flew the coop, hahaha.

Looking down past my feet.  If Cody reads this entry: this is what was in my dream of him
Trying to Get to the Water, except that in my dream, it was a million times more steep. 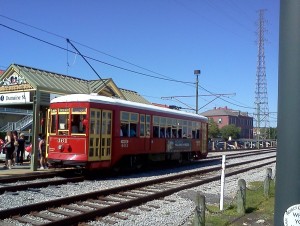 Gratuitous streetcar photo, because I could.

That Sunday, we went to Rouse’s to lay in foodstuffs for the room.  I can only imagine what we looked like, wandering the aisles and doing random Happy Dances at all of the things that we love that we couldn’t get in CO.  Probably pretty silly, but we couldn’t help it.

I’m uncertain if I’ll ever cook with this.  But it’s cool that it’s there.

Bouuuudiiiiin!  Although I’ll prolly get it from other sources, it’s also cool that it is there.

So, that all fairly well FINALLY catches me up to the present, despite the fact that it’s now been a week and some change since that Sunday grocery makin’.  The Present is a new entry, to follow in a little while.