There is a distinct and sudden feeling of Otherness, the second you cross over the border from eastern Texas into Louisiana.  Reclaiming the helm at a welcome center just across the line, I immediately cruised us through Shreveport, and knew I was in the right state because the pro-environmental billboard on the side of the interstate read, “GEAUX GREEN!”  I don’t think I quit smiling the entire rest of the way.

I saw my first blue heron wading by the side of the road.
I saw the division signs begin to read “Parish,” instead of “County.”
I saw signs advertising about a million different crawfish boils.  ‘Tis the season, after all.
I saw other signs from various grocers, all of whom proclaimed they had the best boudin.
In the pitch black of night at a gas station just outside Opelousas, I hunted and gathered my first chocolate Hubig’s pie, and promptly ate it with my coffee, to stay awake a little longer.

I rolled us through Natchitoches, Alexandria, Opelousas, Lafayette.  It killed me, that I drove through the Atchafalaya Basin at night, when I could not see her.  My eyes probed through the dark and the driving rain, just trying to see.  Then, Baton Rouge and the bridge across the Mississippi.  I saw a sign for “Breaux Bridge” and had an instant flashback to my exceedingly early childhood, when I couldn’t pronounce that.  It was “Bo Bridge” for me, always!  I had forgotten about that.

Eventually, I hit Kenner and woke up the sleeping J so that he could navigate us to our lodgings in Metairie.  Hit a little bit of hydroplaning getting off I-10, but handled it just fine in that big ol’ beast.  We arrived around 11:30 p.m. that night, to discover that we could not check in to our digs until the next day. (We were early.)  So, we hopped across the street and got another room for the rest of the darktime, whereupon we slept like the dead, save for my intermittent waking to “protect” the dawg from those mysterious big BOOOMS coming from the sky.

We woke up the next morning to another rainy-buckets sort of day.  The Beach House was across the street from our room, so that was my first sight that morning. 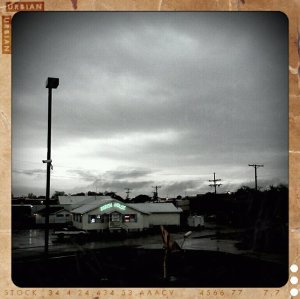 We have since hopped into the Beach House for a drink and some dinner.  Amazing fresh shrimp alfredo pasta, at bar prices?  Heck yez.  That was also my first experience of bar-joy, when I just ordered an Abita without having to ask if they had it.  Hallelujah.

After waiting in the cab of our UHaul for an hour and some change that first day, we were finally able to check into our temp digs.  The only Pet Room they had available was a double bed room.  Whatever – we were done being roomless, so we figured we could deal, albeit unwillingly, with sleeping like we were in the 1950s for a while.  Then, desperate for a hot shower, we made the attempt…only to discover that the water was freezing cold.  J called up to the front desk to inquire about this, to be told, “Ya gotta let it run awhile.”  Alright.  We shrugged it off, cold-showered, and found a break in the rain to haul in all the stuff for the hotel, from the car and the very back of the ship.  At that point, we were at last able to remove the car from the Uhaul, which gave us both a little bit of a sense of liberty.

That Friday after our arrival, J drove the ship and I followed in the car, to our storage place on Tulane.  That was my first New Orleans driving experience, and I’m happy to say that I survived.  I was very excited that morning, to get our stuff into its holding-spot and to be free of the ship at last!  I was also just Happy to Be There.  We hadn’t rolled down to New Orleans proper yet…I squeed when I cruised that curve of I-10 and saw my city skyline.  I squeed as I watched the architecture change and the vibe morph.   I’ve squeed a lot. 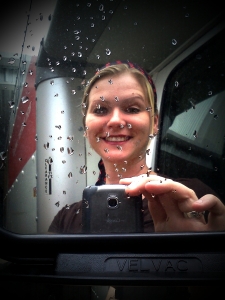 Granted, that fresh perky face didn’t last long after we set to working.  My mental landscape probably felt the same as my face looked in that photo, but boy did I get to sweating!  It was the first sunny day after a few days of solid rain, so it was warm and muggy.  And we were enduring manual labor, by golly!  Before the work began, though, I did some standing around while J did all the checkin stuff with the Uhaul folks.  So I was able to snap some View From Our Storage Place shots in the interim.

In Mid City, you can barely see da Dome there if you squint.

Having been eager to get down there and get to work, we pulled our typical Skip Breakfast thing.  This meant that by 10:30 that morning, after almost 2 hours of unloading, we were starving and woobly.  I wandered across Tulane to Lee’s, on the opposite corner, to feed and water us.  They had stopped serving breakfast foodstuff about half an hour before, but that was okay.  Roast beef poboys for breakfast suited me just fine.  And water.  Lots of water.

Waiting for sustenance, enjoying the conversation and the AC.

I went back over there again later on in the day for another armful of bottles of hydration.  They were very nice, there.  Actually, at this point in the day, I had begun to notice the general Niceness of just about everyone who passed through, whether it was our Uhaul guy or folks stopping in to pull stuff out of their storage units.  Something that I’ve continued to notice, this entire time.  It’s nice.  At any rate, I’m happy to say that not only did I survive my first New Orleans driving experience, but that I also survived crossing Tulane on foot.  It was rather adventurous, standing on that wee neutral ground (would it even be considered a neutral ground, or would it be a median in this case? It was less than a foot wide…)  in the middle of many lanes of traffic.  Haha.

It took J and I six hours to unload that entire Uhaul by ourselves.  Not too bad.  And it was early enough that it gave us time to get back, shower, and rest a bit before sticking our heads out in the City. Which we did.  This time, we let the water run for nearly 40 minutes, and it was STILL cold.  Hrmph.  Didn’t feel too bad after all that muggy labor though, but something would have to be done about that.  Later though.  It was time to go play.