We woke up at the arse-crack of dawn last Tuesday to prepare for our departure.  After taking what would turn out to be my last HOT shower for a week (A WEEK!), we drove in the dark over to P&M’s house to retrieve the UHaul.  They were kind enough to let us dock our ship there, as there were absolutely no spaces large enough in our ‘hood to park the beast.

Yup, our UHaul had a Viking ship on it.  How apropos!

UHaul obtained, we parked in our alley at the apartment and proceeded to hook the car up to it.  Then we crammed all the last stuff into the rest of the car’s passenger seat and also into the driver’s side, loaded up our in-cab stuff, gathered the dawg, turned in our keys, and prepared to mosey forth.  And then realized that the connection between the truck lights and the lights on the tow dolly were dysfunctional.  Bugger.  Thus, our first jaunt was back up to the UHaul place…whereupon they fixed us up and got us on the road.  We were exceedingly relieved that we didn’t have to swap out tow dollies…which would have had us unloading the stuff on the driver’s side of the car in order to transfer it.  Or, worse yet, could one imagine having to get a new truck entirely?  Fortunately, none of that happened.  They monkeyed around on some wires and life was good.  We were still on the road, officially, by 9:00 a.m.

And then it felt real.  While J traversed us out onto the Eastbound Road, I got all excited for the road trip and established our mascots, gifted to us by our friend B the day before:

And then we drove.  And drove.  As we passed through eastern Colorado, I saw what I consider to be My Last Colorado Snow.  It had dusted out there recently, and was pretty bleak-looking.  I couldn’t help but feel a touch of “good-riddance” to that stuff, to be perfectly honest. 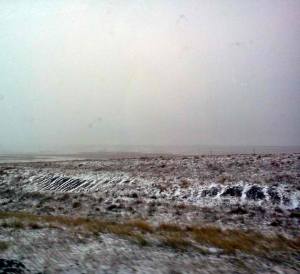 And then we drove, and drove.  On the passenger side, I got the zones and stuck my nose in a book for a while.  Then J started jamming to rap and disco on the one station we could find, which woke us up for a little while.  And then we lapsed back into our comfortable travel silence.  Even the dawg, in his own little seat, passed out.

Eventually, we careened into Kansas.  That was pretty bleak too, until things started to green up a little bit throughout the landscape.  Then, since it was a long straight flat road, I took my first turn driving this 16-foot-monster-with-a-car-attached-to-the-back.  It was pretty harrying at first, I will admit.  Which of course meant then that I drove into rain, making things even a little more difficult.  But, I got used to it. 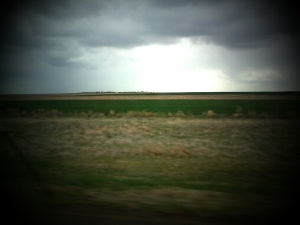 Josh took the helm again outside of Salina, KS, where we turned our noses South for the first time, and thus we rumbled into Oklahoma.  Eventually.  After paying tolls (that I didn’t skip this time, unlike a trip years ago..it was an accident.  Really.) and delving through more Kansas and stuff.  It really was that quiet and zoney and boring.  We found some fun music here and there that would snap us out of our reveries, every once in a while, but then the station would dissipate and we would plummet once again into quiet travel.  Which was alright, really…it’s just that the landscape had  me feeling like that kid who has to get their boring homework done before they can go outside and do something cool, right?

These were my travelling Hobo Socks, exposed toes and all, pointin’ South!

Little did we know that Dark Times were ahead.  We pulled into a gas station in Hesston, KS, famished as we’d been subsisting on road munchies all day and very little of substance.  The station had a sandwich counter, so we ordered up some subs to go.  No biggie.  Although it was obvious that the lads behind the counter had nary a clue what they were doing.  I’ve never seen someone so slow and clueless at making a sandwich!  When I came out with the goods, J had parked the ship in line with all the semi trucks…it was really the only place we’d fit, and that remained the case at every rest stop we touched down at for the entirety of the journey!  So, we ate.  And then on we drove.  We made an uneventful passage into Oklahoma, no big signs or anything and it all looked the same so it was hard to tell.  But, overall it became rather peaceful, nighttime driving.

Until somewhere a couple hours north of Oklahoma City.  I had finally dozed off for the first time, for a little spell, and woke up just in time for J to pull into a gas station, in the dark, mumble that he had to puke, and run into the building to do just that.  “What the??” I was thinking.  I had no clue if I’d heard him right, or *what.*  I took the opportunity to walk the dawg and have a smoke and stretch my legs.  J returned, white as sheets, and informed me that I was driving.  Actually, he asked me feebly, “Can you drive for a while?”  No sweat, I thought…we had 400 miles to our Dallas destination for the night, I could get us there, no sweat.  So, drive I did.  Approximately 200 miles later, as we were approaching OK City proper, J’s very quiet little voice asked, “Can we stop here for the night?  I need to lay down.”

I found a Day’s Inn, and we crashed out under some rather 70s retro geometrical bedspreads.  I was grateful to be off the road, despite my earlier proclivity toward pushing on to Dallas.  However, it turned out to be a very, very, VERY rough night.  (Disclaimer: I am writing this next bit because J told me I could…I was going to be nice and not mention it!)

This very, very rough night consisted of my poor J hopping up every 15 minutes or so to beeline to the hotel bathroom to attend very violently to what turned out to be Problems on Both Ends.  I’ll spare the graphic details, the world can thank me later.  However, I will say this: remember those Batman drawahs that dad gave him the day before?  By a stroke of happenstance, we had packed those in the car instead of in some buried recess of the Uhaul, they were the only ones he had, and they came in very handy, indeed.  At any rate, this was an all-night event, and it was miserable.  For him, miserable for the obvious reasons, for me because there was nothing I could capably do for him aside from the offer of moral support.  Sleep happened eventually, a few hours before we got up and hit the road again.

We don’t know what that was all about.  There had been a tummy bug going around in Denver prior to our departure.  Was that it?  OR, was it food poisoning from the evil sandwich counter in Kansas?  The way it came on and behaved, our bet is with the latter.  I had eaten something completely different, so my non-affected state makes sense.  Moral: Don’t eat sammiches from Casey’s General Store in Hesston, KS, EVER.  EVER EVER.

The next day, J was finally sleeping so I postponed our road-hitting for a while so he could steal that bed-time.  I stepped outside into a rather pretty foggy morning.  Pretty or not, however, I’d somewhat had it with that hotel room, and eventually it was time to move on. 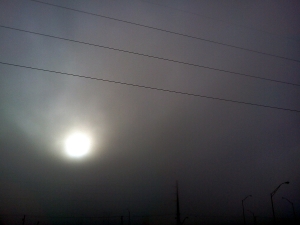 J was wiped from his night’s trauma, and spent the rest of the trip sleeping it off, rehydrating, and battling residual nausea.  Therefore, save for about an hour as we crossed out of Texas MUCH later on, I drove us the entire way from Oklahoma City that morning all the way to New Orleans.  I got really, really good at manhandling the ship.  At the end of it all, I was actually kind of proud of myself!

Oklahoma south of OK City on down to the Texas border was really pretty.  The trek through Dallas was exciting in that truck, I must say.  That was the most fast-paced part of the trek as far as city driving went.  I had forgotten how neat the Dallas skyline is, particularly because one gets to drive right *through* it.  I only hit one traffic jam, which lasted for maybe 15 minutes.  There had been a wreck that had knocked a powerline down…so they were shoving 4 lanes of traffic down into 2.  Thank heavens for the gentleman  who let me into both lanes in front of him.  He was in a large truck of sorts, himself, so I think he sympathized.

As we hit this part of Texas, I started having childhood flashbacks of random things I’d forgotten about.  Whataburger.  Grandy’s.  Braum’s Ice Cream shops.  The Texas wildflowers that grow on the green slopes near the overpasses, of the sort I used to collect and press when I was a kid.  Technically alone, since J was sleep-sleep-sleepinz, I immersed myself in some silent and pleasant joys of rediscovering those things I had not seen in at least 15 years, if not longer.  And then we turned East again, and Shreveport started turning up on the mile signs.  Louisiana, SO CLOSE!  I think I cried.

After Dallas, my eyes began to delight in the sheer GREENness of things.  After grey and pokey winter trees in Denver and the flatlands we’d passed through that very day, the green and the trees were a sight for sore eyes.  So was the warmth.  I finally hit a rest stop to knock  out the kinks, walk the dog, get J movin’ a little bit for a minute, and just enjoy it all for a few minutes. 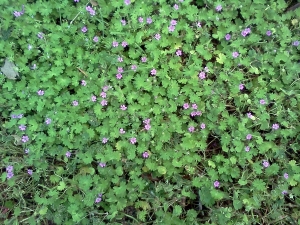 After the rest stop, I desperately needed a rest from driving, so J was awesome enough to charge through his sicky to take the wheel.  He charged us all the way through that last 90ish miles of Texas, over into Louisiana, and then slept again while I got us Home.