That is the sound I keep hearing in my head, now that I am back online.  You know, that “Ham Radio Coming Back On the Air, Pump Up the Volume Style” sort of sound.

Hello world, greetings from Louisiana.  As I write this, I am drinking an Abita Jockamo IPA and am at the end of a day of simultaneously job hunting like the wind, and working on a new project.  Will talk about all of that later.  My brain has this organizational thing, where I have to catch up completely, in order, from the last time I wrote.  So, that is what I’m gunna do. (I apologize in advance if it gets kind of “summaryesque” or if I gloss over details or emotions…some of it’s just personal.)

One week ago today, we were somewhere in Kansas?  Oklahoma by now?  I can’t remember, but we were out of Colorado, I do know that.  The weeks prior to our departure were a whirlwind of tying up loose ends at work, training successors like crazy, and packing things.  All of this culminated in our final weekend there, which was another whirlwind:  of parades, festivities, emotions, truck-loading, apartment cleaning, more festivities, and more emotions.  All of it feels like a million years ago, it’s wild.

The Friday before we left was my last day of work.  THAT was wild, it felt so strange.  They threw me a very cool cupcake party, complete with Mardi Gras decor and butter pecan cupcakes.  Gifts, heartfelt cards.  It felt like a dream, having inhabited that environment for nearly 11 and a half  years and being there that last day, looking around at all of these familiar things and knowing that that was it, I was done, I would not be walking back through that door the following Monday.  Bittersweet, they are good folks to work for, and with, and shall never be forgotten.  I also made my (you know what I’m  going to say!!!!) last Walk to the Corner Store that day, and grabbed the following photograph, something I’d been wanting to do for weeks but had not gotten around to yet.  Just a wreath, with a rose, on a door.

The Saturday before we left was Saint Patrick’s day.  Denver has a rather huge parade, and J and I had spent the last couple of years marching in it with our Rogue pirates.  This year, we observed from the sidelines.  Arrived early to get good streetside seats, and everything!

It’s hard to even feel this in my head, even after only a week away, but it was chilly that morning, at least on the shady side of the street where we were perched.  I was grateful to be on the shady side, though, because I had epically failed to apply sunscreen.  So I came out of the experience unscathed.  (I will say nothing of the sunburn I have received since, wandering the FQ the other day.  Oops.)  Small children ran amok blowing plastic horns, there was expectation in the air.  J made frequent trips to the middle of the street to get some sun and warm up. 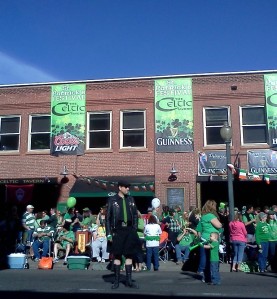 The parade itself had its neat, entertaining moments…but we learned that it was FAR more fun marching in the Denver St. Patrick’s Day Parade than it was to sit on the sidelines and watch it.  Lots of overly large gaps, lots of what we refer to as “drunk trucks,” those “floats” that are nothing more than some beer drinkin’ folk rollin’ down  the road.  No one *gets* throws, either.  So, overall, meh.  But it was worth it to see the Rogues come sailing up the street.  This year, they put a flag corp together to lead the way, and the only word I can come up with to describe how they looked, doing their flag routine with the ship rolling behind them, is “MIGHTY.”  They looked mighty, and impressive, and I was very very very proud of them that day.  PROUD.  And MIGHTY!  We left shortly thereafter to relax a little before heading off to our going-away shindig that night.

Our going away shindig was very cool too, and full of more emotion, and meaningful gifts, and heartfelt words and love.  It was small, but it was perfect, encapsulating those closest members of my tribe, save for one or two.  I sported what I now call my “Storyville Outfit” which I’ll have to bust out again sometime soon, it was way too much fun.  It was Saturday night that the solid, permanent (well, not “forever” permanent, but “I won’t see you again before we hit the road”) goodbyes began.  After Saturday night, the pre-leaving tribe narrowed to who we would see on loading day the next day, and cleaning day the day after that.

The Sunday before we left, we loaded up the UHaul.  This was a ridiculously stressful day since, as the hours passed and more and more Things got shoved into the truck, we began to wonder if we would be able to fit it all in!  Watching J and C take 25 minutes to get the couch out through the apartment  front door was classic, though.  J and I had  lived there  long enough that neither one of us could really remember how we got it in there in the first place.  People came to help and departed in shifts, by accident, but it worked out reasonably well.  We got it done.  Or, as done as we could for that day.  Some things still needed to come out, but they were Car things, or Last Things, that sort of thing.  And things.  More “permanent” goodbyes ensued during the day, one of which was more difficult than most had been prior to that, which surprised me.  Then, some of  us went down a block to Charlie Brown’s afterwards, to unwind.  And then more goodbyes.  By this time, my Goodbye Stamina was really waning.  I mean, it was REALLY wearing me down.  At any rate, that trek turned out to be the first of THREE trips to Charlie Brown’s that weekend.  Which was pretty awesome, and kind of fitting. 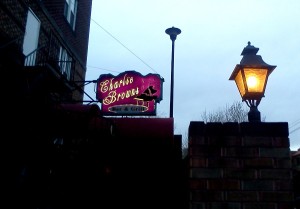 The Monday before we left was Cleaning Day.  Some  more of our hardcore trooper friends arrived to help us scrub out the joint.  My goddaughter even helped, scrubbin’ floors with her mum and then helping me with the fridge.  Yay her!  We took a midday break to meet up with my parents for lunch at…guess where?…Charlie Brown’s, which was “our” lunch spot.  They gifted us with the last Catwoman comic from the Gotham City Sirens series, which I needed for my collection, a couple of chocolate bunnies for dire times (HEH!!!!!), and  2 pairs of men’s Batman drawahs.  Those drawahs came in handy on the trip, which I will write about later.  The end of lunch was very emotional – it was hard to leave my parents…we’re such a solid unit, and we’ve never lived *this* far apart before!  I so look forward to gettin’ em out here soon.

OH!  And on the way to  lunch that day, I found ONE more mysterious Oscar sticker to add to my collection!

Then we finished out the Day O’ Cleaning, leaving this VERY last pile in the now-barren living room which would go in the cab of the truck or the car the next morning, and then went (HAHAHA) to Charlie Brown’s for last drinks, as a farewell AND also to celebrate Josh’s birthday, which was that day.  (And which, BAD WIFE, I had forgotten in all of the mayhem!)  We had a good time with everyone all the way to very, very end.  I love my tribe.

And we’re so very grateful to every single person that we got to see, that entire weekend.

Then we went to bed in an empty, echoey apartment, in preparation for the Grand Hitting of the Road the next morning.  Even then, the entire thing still seemed so unreal.