that I could hear through our bedroom wall and from the balcony outside our window, from the neighbor’s apartment next door.  Again.

Don’t get me wrong: I am not typically a grumpy sort of neighbor-person.  I usually do not mind the normal sounds of a group of people hanging out and having a good time.  But this guy?  The issues go way back.

J and I have lived in our apartment since early 2008.  In that span of time, we have seen people come and go, move in, and out.  This latest one has been around a while, and I wish he’d never moved in.

A certain amount of silence reigned, for quite some time.  Then suddenly, last year, we were subjected to many, many nights where he and his gal friend would come home after bar-closing, extremely inebriated, and fighting.  REALLY fighting.  J and I would wake up at 3:00 in the morning to screaming and battling.  The guy not only screams at his girlfriend, but at his dog for just being a dog.  The knick knacks on our bedroom shelves would vibrate and rattle, sometimes, because the guy is an oaf and would go stomping around next door, hollering.  This would scare OUR dog, the poor thing, and no one scares my dog.  There were even a couple of nights where the arguing spilled out into the hallway and echoed for everyone on my floor to hear.  I spent a couple of early mornings crouched just inside my front door with the cops on speed dial, waiting for the sound of physical contact.  Just in case.  Nothing ever seemed to go THAT far, but you never know.  At any rate, it was stressful and sleep-depriving and more stressful, and just about sent us over the edge many a time.

Needless to say, later on last year we complained to management and he got a talking-to.  They didn’t give away who ratted them out, but he was apparently rather pithed, and defensive.  I think he eventually figured out that it was us.  Every time I encounter him in the hall or the elevator, he kind of droops a little, like he knows he dun wrong.  That’s right pal, and at this point I don’t think you could ever dun right.  Grr.  The lecture has seemed to help, though, for the most part.  I don’t hear domestic battling anymore, necessarily.  Almost to the point where we figured she finally got smart and ditched him…but I still see her around so I know that’s not the case.  But he still screams at his dog.  I feel really bad for that dog.  Is dognapping illegal?

So, it’s quieted down quite a bit.  But they still get social over there.  And we can hear it.  And although I normally don’t mind people’s social noise, I will always mind his.

Nothing wakes you up, though, like a sudden tight design deadline.  That was my morning, here at work, and it was stressful but also exciting.  I love extreme deadlines, they get the blood pumping. 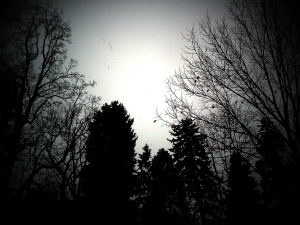