If you drive or walk or trip or amble around New Orleans long enough, you start to notice something. A common something, a something that lies consistent among all neighborhoods and in all parts of town.  That something is the Katrina X.

There are quite a few them that remain intact purposefully.  These are the custom-made wrought iron versions placed over the top of the original, an artistic memorial to what that particular household survived.  Or they are the original markings simply left alone, all else renovated and repainted around it except that one thing as a way to exhibit the Barbaric Yawp of, “Yeah, Katrina you bitch, you came and shit broke and we were destroyed but we came back and here’s our proof.”

And those purposeful memorials and means of maintaining remembrance are at once beautiful and alarming, the approach artistic but the sentiment very real, very visceral.

But then your guts fall out completely when you drive, walk, trip or amble past a place that is ailing.  That is abandoned. That is crumbling, crumbled, gone.  But there’s that X.  It’s still there, this one not on purpose but out of circumstance, a story in itself.  A reminder.

And what’s horrifying is that, sometimes, you really don’t even SEE them anymore.  Like they’ve become part of the landscape.  You live with them every day, every moment, and they’re just as consistent a part of your New Orleans life as the moss in the trees and the potholes in the streets.

Until you suddenly notice them again.

Like a couple of weeks ago, for me.  I’m currently taking a collection of images that show how unstoppable nature is down here.  Vines and ivies and ferns and stuff that grow on everything, right?  So as we were driving down the street on the way to work one morning, I saw a bunch of plant life popping triumphantly out the top of a roof and I leaned out the window and photographed it…except the traffic light changed and we started rolling forward again at the same time the camera shutter was doing its work.  And so I got this instead, the house itself, the one that nature was taking back.  X and all. 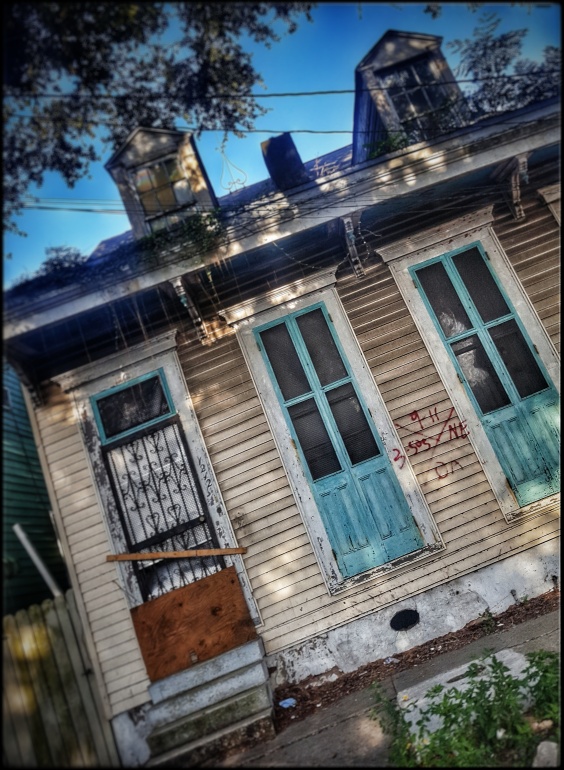 And I kept it, because we all gotta remember.  And we all gotta push the questions about why it’s 14 goddamn years later and this house is still like this.  And why just about every other house on this same stretch of blocks is JUST LIKE THIS.  And how everywhere you go, EVERYWHERE, you still see stuff just.  Like.  This.