I’m talking about that thing where you smell something and it instantly transports you back to a certain time, or place, or reminds you of someone specific.  Now, I could launch into some sort of scientific diatribe about Olfactory Memory and the psychology attached to it and the studies that have been done.  But I’m not.

Instead, I want to talk about Earl Grey tea.

Earl Grey doesn’t even have to be brewed for it to pick me up and plop me right back down into the middle of my college years in New Mexico.  Just opening up a package of the stuff will do it just fine.  Even better though when it’s steaming in my face, with the very precise amount of sugar and milk that I’ve been putting in it for 20 years.  (20 years?!  How is THAT possible.)

Earl Grey tea.  It is all of these things:

The room in my apartment where I had my Miles Davis poster hung up.

Jazz nights at the bar in the Hilton hotel.

It’s reading copious amounts of Jack Kerouac and Ginsberg and all the rest of my wayward brothers.

And visiting Denver for the very first time as an adult.  Man, what a hip city that used to be!  That great funky coffee shop called Paris on the Platte that sold clove cigarettes in the back room and that tall gothy guy who served me my first ever pot of Cambric – a whole POT of Earl Grey tea all mixed up with steamed milk.  I ordered it because I already loved Earl Grey, but damn, that stuff blew me away. And later, that diner that served all the right greasy stuff and really black coffee that you had to go into a basement to get to – what I dubbed the Tom Waits diner.  When I moved to Denver later, I never could find that diner again.

Stripey shirts and that black Greek fisherman’s cap that I always wore backwards.

Jazz nights at the trumpet player’s apartment, with a huge bottle of cheap Burgundy sitting on the kitchen counter.

Did I mention Miles Davis?  I’m listening to him right now, writing this.

Oh, and it’s that very specific mug that I always drank it out of – that one with the Jack Kerouac caricature on it that they sold at the Tattered Cover in Denver, that I think I got on one of our visits up there.  The handle broke off of it somewhere along the way, but I still have it, patched with superglue.

It’s so many English classes, so much reading.  So much writing.

Painting, too.  All those times I was so into what I was doing that I’d dip my brush in my mug by accident and not notice until I got to the multicolored dregs at the bottom.

And art parties at my friend’s big ol’ house where we had too much wine and drawing stations set up all over the place.  And other evenings with that same friend, hanging out on his couch and reading out loud to each other from whatever books we were reading at the time.  I distinctly recall A Tree Grows in Brooklyn.  And Jack – ALWAYS Jack.  When my friend took off on a cross-country motorcycle trip with his pet rat, Chloe, I gave him my paperback copy of On the Road.  When he returned, the book returned with him.  Chloe was really into it too.  I still have that copy – with it’s cover ragged-edged from little tiny awesome rat teefs.

It’s hours and hours hunched over books, and scripts, and drawing pads and journals.

It was feeling like a cool hip beat chick with my weird hats and scarves and braids in my hair carrying a backpack with a gozillion books and lugging 90 tons of art supplies with a whole bunch of jazz in my step.

Hot DAMN, I love this stuff.  I have a lot of other memories from this same timeframe that aren’t so great, but this tea brings back all the good ones.

It’s no wonder Jean Luc Picard has always been my favorite Enterprise Captain.  Because we both dig Earl Grey.  Hot.

Just a little free association while I drink some morning tea. 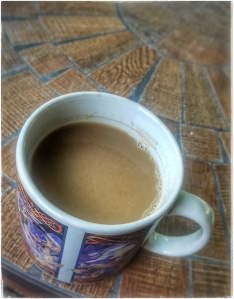