Well, hello there world! Greetings from the other side of Mardi Gras. I am laughing so hard right now at my first Mardi Gras post of the year, whereupon I shared my excitement and overwhelmedness about being busy preparing for my FIRST EVER PARADE.

I’m not laughing because it was ridiculous or otherwise laughable. I’m laughing because this season, quite unexpectedly at the time that was written, I wound up ALSO in my second and THIRD parades! And on the news. And in the paper. I’m still stunned by all of this. Add all of that to the parade-watching, hedonism, and other boogying that dances hand in hand with that fine Carnival season, and my goodness…in that last entry, I didn’t know WHAT busy was yet!

I have experienced so much this year that I have to share it all in episodes. Thus, let us begin with Krewe Delusion, my first parade ever, which took place back on January 31.

The prep work for this was crazy. Krewe des Fleurs was getting ready for its first march in full force. We made flower costumes. We gathered up our green bits. We made throws. This year, our throws were Lilies, all done by hand in origami. We folded and folded and FOLDED!

After the million-hour duration of fold time, we painted and painted and PAINTED! Then our little blooms were dipped in scented wax, stems were added, and the final touch, our Krewe stickers, were leafily added to the stems.

Meanwhile, while all of that was going on in the background, we were putting in time at the Delusion Den helping Krewe Dat 504 get ready for the parade as well. Since our group was so small, Krewe Dat was amazing enough to embrace our blooms fully and so we joined forces with them for our first march. It was so much fun to help them with their throws and joke around and assist with their float.

And then, at last, the magical Delusion weekend was upon us! Oh JOY! I got home from work a little late that Friday night, ready to finish up throws and sort everything out and finally hit the hay and rest up for the next night’s parade. I found it a little odd that J was kind of just…standing in the middle of the living room, when I came trudging wearily through the door. Then everything got surreal when he called to the back of the house, “OKAY! You can come out now!!”

What? And lo! One of my dearest friends (The Madam) emerged forth from the guest room – she had journeyed all the way to New Orleans from Colorado, because she didn’t want to miss us marching in our very first Mardi Gras parade. Best. Present. EVER!

Finishing up throws and sorting everything out was MUCH more fun, then. I even made my Special Throw right in front of her – and then handed it to her the very next day before we struck out for our fellow Fleur’s house to get ready to roll.

So Saturday morning comes at last. I paced around nervously for a while and then started getting ready to go. I piled on the makeup. I battled the sparkly green fake eyelashes and kind of won. I stepped excitedly into my green tights and green leotard and lighter-green booty shorts and shiny green corset and then. THEN. As I was walking around the house and putting on my wig, POP! Major. Costume. Fail.

See, the weekend prior, I started fretting about the fact that I was going to be in tights, a leotard, and booty shorts all trapped in by a corset because OMG what is going to happen when I have to PEE?! Easy, I thought! My clever solution was to cut the crotch open and then add snaps. Instant snap-crotch leotard. Easy escape!

While beautiful in theory, as I was running around the house that frentic Saturday morn, the POP I experienced was an instant lesson in what happens when you try to hold spandex shut with two tiny snaps and some stick-on velcro.

Spandex does not stay shut with two tiny snaps and some stick-on velcro.

New solution? Safety pin. Except that I couldn’t reach the back of the leotard (which was now sproinged up at my waist) and hold it together with the front AND jam a safety pin through it all by myself. Thus commenced the single-most bizarre experience of my life, as I lay stranded on the bed in a wig and corset, very much the turtle with my legs in the air, as my incredibly devoted husband safety-pinned my crotch shut while my best friend stood in the background and we ALL laughed our asses off so hard I thought my makeup would run. J, marching with us as a handler, definitely did his duty that morning.

We finally got it together. And after we’d loaded up the car and were well on our way to the Marigny, I received a text from my friend and fellow Fleur who had taken a picture of the SAME EXACT SITUATION I was just in. She’d done the same thing, with the same repercussions. For the rest of the night, safety-pin-inspired, we were officially the PUNK ROCK CROTCH duo.

After arriving at Fleur L’s house, a frenzy of last-touches occurred. I had even MORE makeup added to my face, and watched others’ makeup applications so I could learn how to do this stuff. We ate some jello shots. We ran around doing parading-girl things. Tacking down stubborn eyelashes, the usual. At one point, finally, I had to pee, and found myself taking everything off because I couldn’t face the safety pin situation again. It was the last time I peed, ever. Well, until hours later at the after-party, anyway.

This meant I had to be laced up again. And put myself back together. 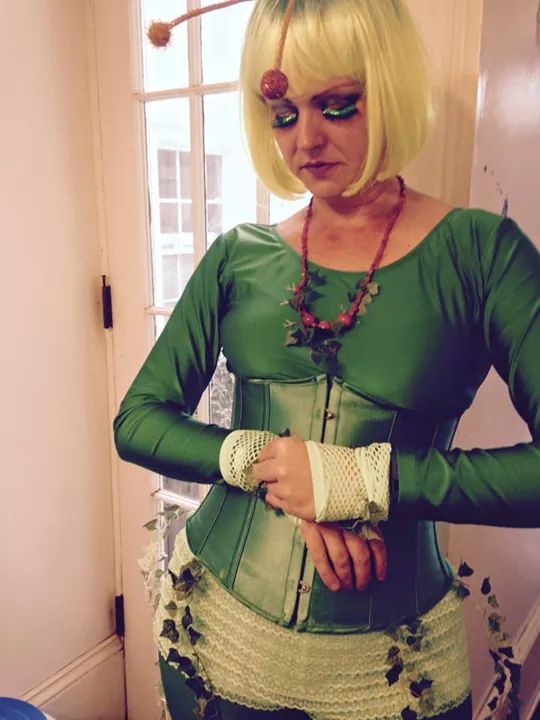 Getting it Together.  Photograph by Nicki Funk.

Nicki Funk did an incredible job of capturing the pre-parade preparations. You can see her whole gallery of shots here!

Once we got to the stage where we were finally ready to don our Flowers, she documented each and every one of us with a portrait. 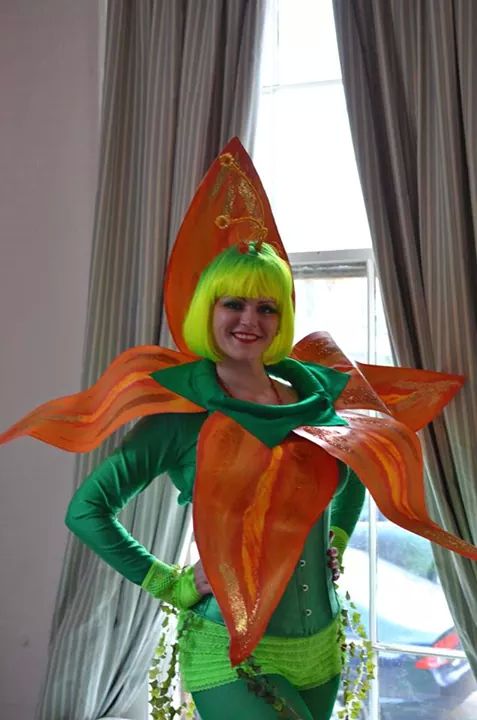 At long last, we were ready to hit the street. After a bunch of hustle and bustle to get everything together that we needed to bring to the Den for lineup – hilarious in its own right as we all discovered what blooming bumper-cars we can be when we have those flowers on all together -we stepped out of the house and the goosebumps started.

After all the work, and all the preparation, this was the first time we’d all SEEN each other together as a group. It was phenomenal. Truly, it took my breath away.

Nicki was geared up to get some group shots, and the neighbors across the street, in their delight, offered to let us use their front steps for the photo. This is one of my favoritest images ever: 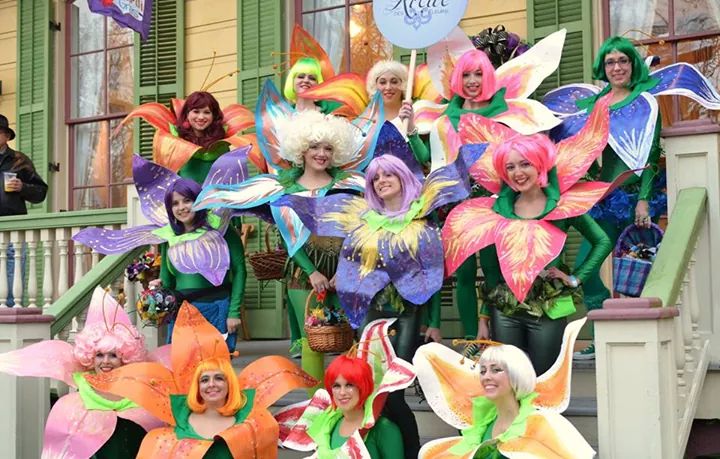 The entire walk through the Marigny to the Den was like an incredible miniature parade in and of itself. Folks were out lining up on the route, the party vibe was fantastic, and the hoots and hollers and cheers we got as we made our way to lineup assuaged (with the help of the champagne toast we’d made prior to leaving the house) the last vestiges of stage fright.

We arrived at the Den and found our spot in the line. It was really cool to see everyone all costumed up and ready to roll! And then, at long last, we hit the street.

At Line-Up!  Photograph by Laura Dean-Shapiro

When asked what it’s like to march in a parade, the first phrase that comes to mind is: Sensory Overload. You’ve got people on either side of you cheering and hollering and yelling and clapping and when you have throws you also get the begging and pleading and the squeals of joy when you hand them something. And the cries of disappointment when you don’t. It’s the biggest energy-rush I have ever experienced. A long walk through a canyon of people.

It was really exciting to see friends and coworkers and other folks I know, out on the route. I missed a couple of folks, unfortunately, because of that sensory overload thing. Sometimes it’s hard to pick one yell out from another in that cacophony!

What a walk to remember. Things I learned: 1.) There is a decided difference between the crowds in the Bywater/Marigny vs. the French Quarter, and for the most part I prefer the first. 2.) If you’re carrying throws in a basket and marching that close to the people on the route, certain obnoxious folks will actually reach out and STEAL throws from you. Who DOES that?! 3.) Parading is so fun that a 4-mile walk feels like nothing. Until you stop moving. 4.) Putting tons of time and effort into something like this is SO worth it, and 5.) A Punk Rock Safety Pin Crotch will indeed hold up for a whole parade…barely.

By the time we got back to the Den and the after-party, my flowery marching dance had definitely turned into a pee dance. My dear friend the Madam, after a 30-minute wait for the restroom, had to come in and help a sistah out. I’m so grateful for a good husband and close friends! And we got up in there and discovered that the durned safety pin was about to sproing! Now THAT woulda made a flower jump out of its pot, indeed!

I “roamed free” after that, and it worked out just fine. After a drink and a jello shot with a girl dressed like a cockroach, it was time to go home and sleep the sleep of the awesome.

You know what happened next? Several day later, as we were riding the post-parade high and kneading out sore muscles, the Fleurs were contacted by WGNO, who wanted to do a little news spot on us. Us!!! So we gathered with our flowers and worked on more throws and did some costume repair in the background while our founder and our costume designer did an interview. HOW COOL IS THAT!!!!

Here is the link to the spot:

And do you know what happened THEN? That news spot wound up resulting in Krewe des Fleurs receiving an invitation to march in the IRIS parade, a couple of weeks later! But before we did Iris, J and I found ourselves in the Chewbacchus parade, and these are all tales for another entry. I told you these were long, and that the stories are many.

So, until then, MWAH!