I usually have a rule for myself, of not posting more than one blog entry in a day.  I’m breaking that rule today to get the following out, because I’ve been sitting on these emotions for weeks and…it’s just time.  More about my crazy month-and-a-half will follow in a more regulated fashion.

I’m glad I’m not the only one who gets nervous when faced with seeing someone for the first time in 2 years. It’s wild – no matter how close you were/are, no matter how epic your relationship with a person or a whole group of people is, no matter how In Touch you’ve kept via Facebook and email and text message and other technological means…walking up on a moment of AT LAST face time with someone separated from you by years (if not emotion) can be a very scary experience.

Your heart races as you approach the place where they are. You get a little clammy. You think, “What will this be like? Will it be weird? What will we talk about? Will it be all awkwardness and new inside jokes that I don’t get? Is there still love there?”

And then. There they are. There you are WITH them.

And it’s like you just saw each other yesterday.

Except that you’re hugging each other and refusing to let go and maybe you’re crying a little bit. The crying part didn’t used to happen before, when you’d actually just seen each other earlier that same week. Nevertheless, all your panic results in a Very Happy Reunion, and then it’s like you never missed a beat.

The weekend before Halloween, J and I went back to Colorado for the first time in two years. It was almost EXACTLY two years, even – we hit the road  toward New Orleans on Halloween Day of 2012, so we were that close to the mark. We went because, months and months ago, our wizarding family at the Avistrum Academy of Sorcery asked if we would be able to come back and do a show with them at Mile Hi Con.  Months and months ago, J and I ran the traps, got our vacation requests approved, and made it happen. We spent a month with them via Skype, for Friday night rehearsals. We plotted and planned. I had Facebook Chat conversations about a shared Herbology class. We pulled our Professor costuming out of the vaults and packed it up. Wands to the ready, we got on an airplane and flew to Colorado. Just like that.

Our hosts, J and B, are always a pleasure to see and we didn’t have that 2-year angst with them because they have been out here to see us in the past for their Halloween jaunt. It was comfortable and normal and a good transition, I think…

Because the Friday afternoon after our arrival, we were due to be at the hotel to help set up the Avistrum space, and everyone (nearly) was going to already be there and we would be walking into a room full of people whose hugs we had not felt and whose laughter we had not heard in. Two. Years.

I was terrified in that I’m So Excited I’m Shaking kind of way. Literally. We loaded our stuff up into our hotel room before anything else, and then J and I looked at each other and I held my hands out to show him how much I was shaking and he said, “Well, it’s time,” and we went up to the top floor and walked into a space that I couldn’t believe I was in again, and there they all were.  It should be noted that, despite our two-year absence from friends, we had not been in this space, nor done this show, in THREE years, due to the need to time out our departure. 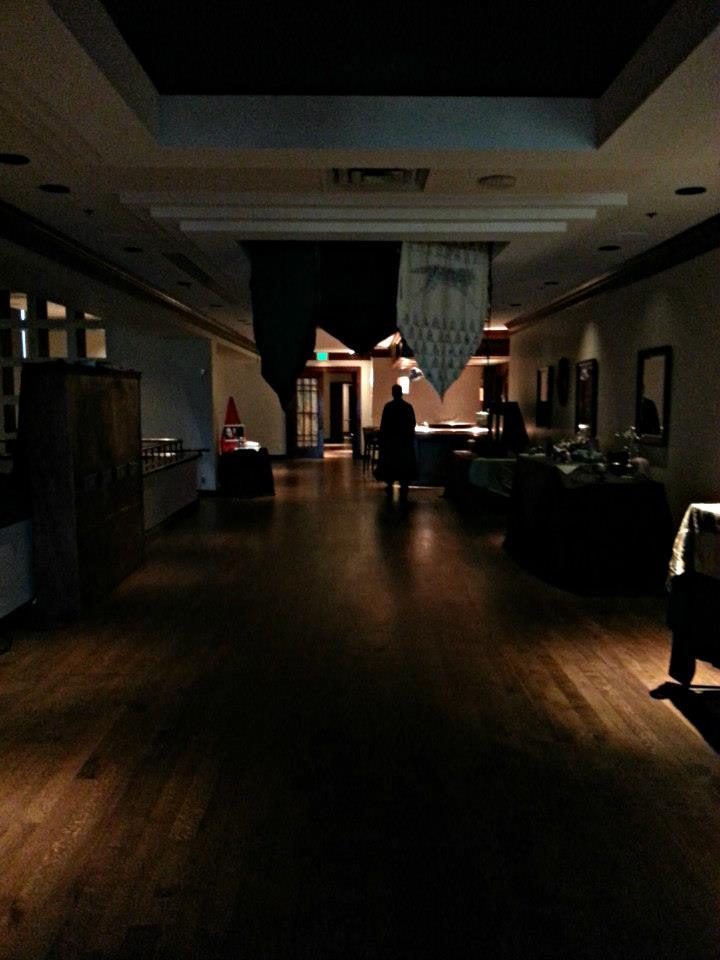 J walks through hallowed halls that we left 3 years before.

Immediately, many long hugs ensued. And happy tears. And shouting. And certain laughs that I so miss ALL THE TIME. And it was incredible and wonderful and then…

And just like THAT, it was as though not a single second had passed since we were in a room with these folks. Like we hadn’t missed two years worth of shows in this space. Like we hadn’t been gone at all. Like we’d never left.

And with that, we commenced an amazing weekend. We did a spectacular show of which I am grateful and very proud to have been a part. And the reunion didn’t stop with the cast. There were a bunch of kids we left behind too that it was so amazing to see – despite the fact that it made me feel old when some of them came up to me and I realized that they were suddenly taller than me and their voices had somehow changed. We didn’t miss a beat with those students, either.

And, it was brilliant to once again be in a hotel room drinking wine with one of my best, during an evening costume change. 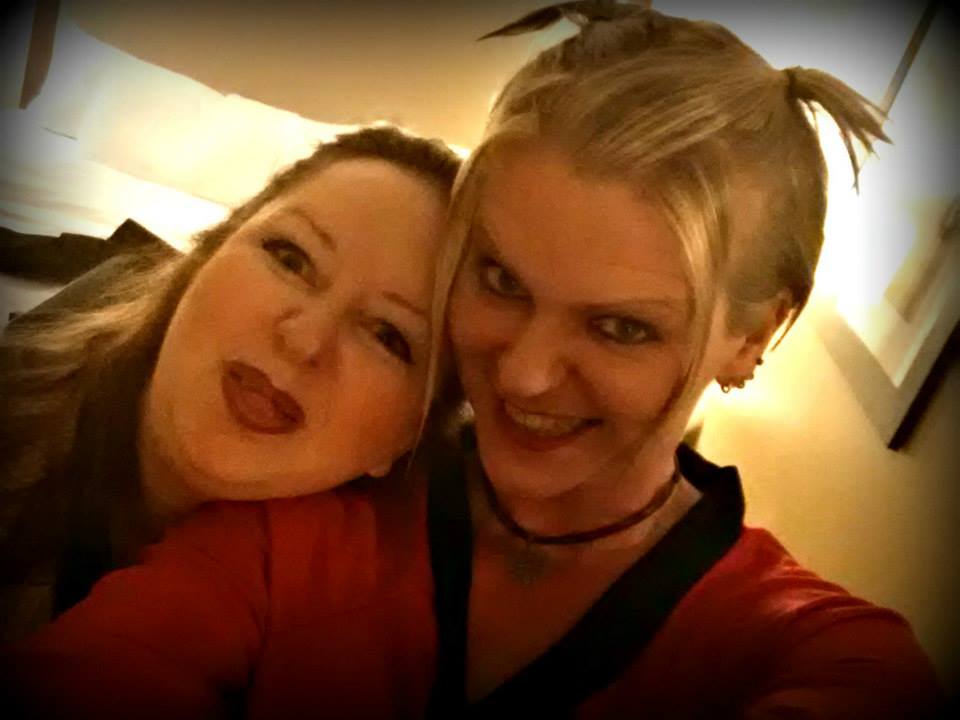 In off-time, sitting around the bar felt the same as it always did. Even the new cast members who came on after we left felt familiar, since like always leads to like. And those precious moments of silence, one-on-one to catch up with people, were priceless. 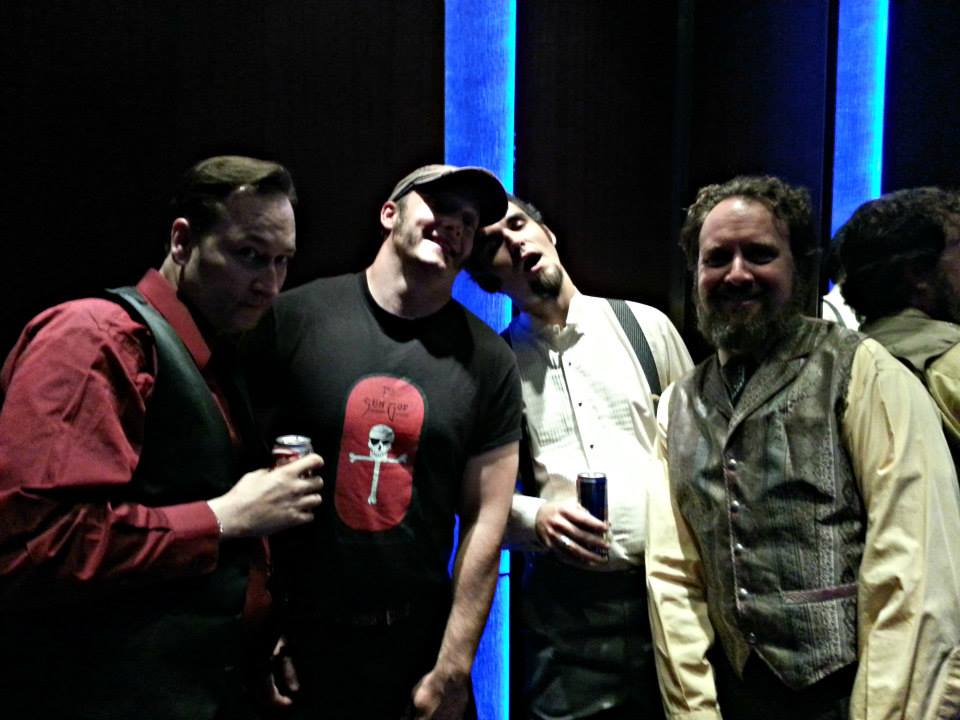 One of my most treasured moments all weekend – a moment with some of my favorite people.  After a whole day of show, we were exhausted!  …Three Colubrae and One Parador Walk Into an Enigmus Elevator…

And the laughter. THE LAUGHTER. I haven’t carried on and joked around that much in…well, two years. I haven’t laughed that hard in two years. It was awesome to see J do the same. It felt so good. 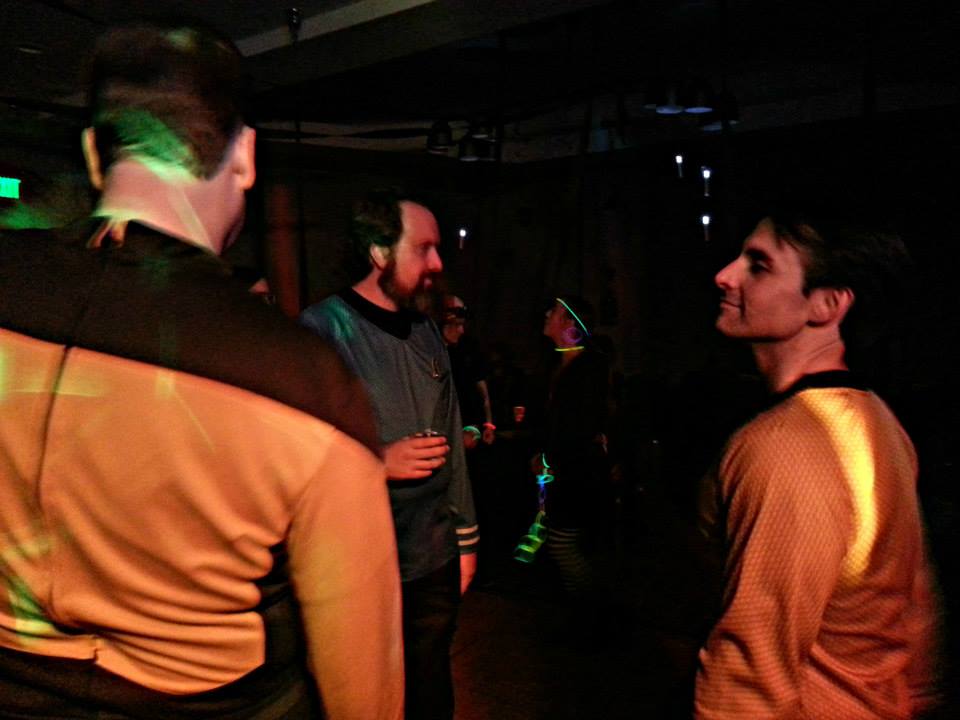 Some things never change.  As usual, Starfleet came out for the Dark Wizards Ball.  It was so good to see these guys together again!

After the show, and the weekend, came to an end, our hosts threw a small gathering so we could see the folks that aren’t part of that organization. It was a wonderful opportunity and I am grateful to them for hosting such a thing the night before we all had to be on a plane the next day.

The reason I began this entry with the statement of “I’m glad I’m not the only one who gets nervous” is because eventually, at that Monday night shindig, my crazy soul-sister Daphne (who gifted me with the sign you see in the banner here, which in turn inspired the name of this blog) flew into the room and commenced another round of Epic Hugs and she was the only one who ever said to me, “I was SO NERVOUS on the way here!! I had no idea what to expect!”

Leave it to Daph to speak the truth. I suddenly, in this way and so very many others, didn’t feel so damn alone.

I’ve been slowly developing a theory over the last couple of years that a person gains such an amazing tribe but once in a lifetime. I’m not sure if that’s true or not but it sure as hell feels like it, sometimes.

This is NOT to say that new friendships cannot be forged. Not at all! I feel, now, here, that I am on the precipice of developing some amazing relationships. For me, amazing relationships stem from hard work and making things happen, a lot of which is just being born right now. It just takes time, is all.

Nevertheless – getting on a plane and flying to Colorado and suddenly being surrounded by my favoritest people in the world? After two years, what it did was show me that it is NOT impossible to touch my tribe again. That leaving a place does not mean that it disappears. That their world is not out of reach. Flying back with two of them? That shows that our world is not out of their reach, either. That goes for things you miss too, and places.

As J so succinctly put it, “We left them, but we didn’t leave them behind.”