Approximately 2.5 weeks ago, or so:

I sat at the computer in my newest room, this one in Colorado, biting my lip very, very hard.  Freshly wounded from what felt like a failed trip, I nevertheless had an entire stack of New Orleans photographs to edit, and was bravely going through them one by one.  Duty calls, as it were.  However, the sense of duty did not make it any easier to look at photos that had been taken just the week before in a place that I did not want to leave, so I was biting my lip to keep myself from, once again, allowing my eyes to leak.  I was already tired of leaky eyes by then, so I was putting up a good battle.

It was about then that J came through the room and peered over my shoulder.  Seeing the image on the screen, he asked, “So, how many Bead Dogs did you get while we were there?”

Around the sniffles and snuffles that continued to emerge, despite my best fight, I pondered for a moment and came up with, “Five, I think?  Including these last two.”

He then wandered off to points unknown, undoubtedly either the kitchen or living room, leaving me to my work feeling a little better than I had before.  It was the phrase “Good Start” that lifted my spirits that day, and I threw myself into my editing with a new enthusiasm.  Gods know there is an entire menagerie of Bead Dogs that I have yet to capture, and that “Good Start” was a reminder that hey, that herd o’ painted canines can perch on their flat pedestals for a while and wait for me, because I will get them yet!

That being said, here are the last two Bead Dogs that I had the random joy of finding during our last week in New Orleans, prior to our journey back to Colorado.

The first was on the Riverwalk, where we’d not yet wandered. We found ourselves there whilst waiting for the next Algiers ferry.  This guy was a Collage of Awesome, thereby causing me to shoot him from all angles, as seen below:

Riverwalk Bead Dog.  I admit, I felt a little dorky photographing his butt.

Then, upon disembarking the ferry on Algiers Point a very short while later, this guy was perched there, waiting to greet us: 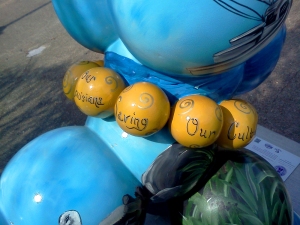 And there we have it – the Momentarily Final Bead Dogs.  A Good Start.  For Now.

Now, I am closing the lid on the Bead Dog scrapbook for the time being.  Since I can’t help but notice things, no matter where I happen to be, I am instead preparing to open a new collection box.  Coming Soon!