It is astonishing, on a 90° day with 74% humidity in New Orleans, the grand difference it makes depending on whether the sun is, or is not, behind a cloud.  If the sun is tucked in all cozy-like behind a soft blanket of cloud cover, the temperature outdoors is more than tolerable, it is downright pleasant: warm, balmy, mellow.  However, when the sun wakes up and un-tucks itself from its cloudy little nest, it’s all over.  That heat can strike and knock the air out of you, drop you to your knees on the wobbly flagstones.

Such was the case last Saturday, as we were running errands in the French Quarter.  The sun was out, nary a blanket to be discovered in the sky.  What better way to gain some relief than to wander around for a while in the dark?

In the past, as visitors to the city, we always noticed the Musée Conti Historical Wax Museum as we were passing by to other destinations.  Unfortunately, they never seemed to be open during the times that we were wandering that way.  Now, living here, it has been on my list of those random things that I finally wanted to see.  So, I checked out their website, found their schedule, and on that hot and sunny Saturday, we finally ambled in.

See, the museum is only open to visitors three days a week: Monday, Friday, and Saturday, from 10:00 AM to 4:00 PM.   Otherwise, it is also touted as an event space.  Wanna throw a party?  Get married to an audience of wax figures staring creepily at you, as they are creepily wont to do?  You can! 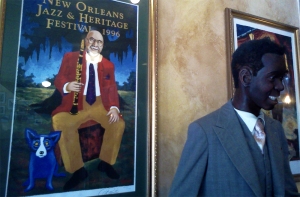 Upon entering the lobby, you are greeted by a young
Louis Armstrong, who stands among a display of Jazzfest posters.
The poster here features Pete Fountain, along with classic NOLA George Rodrigue blue-dog.

We gained entry to the kingdom at a pleasantly modest $7.00 per person and blissfully entered the exhibit area, which was air-conditioned, dark, and deathly silent with the thoughts of all of the People Who Do Not Move, the stars of the show themselves, the statues.  Wax museums are always creepy, no matter the subject.  While the museum’s exhibits primarily feature tidbits and scenes of the history of New Orleans, you simply still find yourself waiting for those guys to move.  And nothing…NOTHING…is eerier than the ones that have their backs to you.  When are they going to turn around?  Reach out and shake your hand?  Glare at you and say, “Hey lady, take a picture why don’t ya?!” because they’re sick of being stared at?  I adore the creep factor of wax museums, and on that level, of course, Musée Conti did not disappoint.

It was very fun to see displays depicting some of our favorite bits and bobs of local history.  I was unable to capture some things, like Jean Lafitte, or the ladies of Storyville, as they were, appropriately, dark dark dark.  However, we also saw:

The nuns welcoming the famous Casket Girls to the Ursuline Convent

Napoleon in the bath.  “Sure, let’s sell Louisane, non?”

The Battle of New Orleans 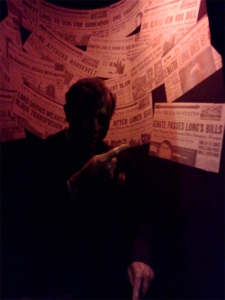 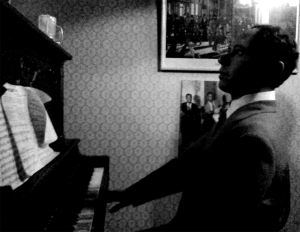 There are Mardi Gras things, of course.  How could it be otherwise?

Zulu! I was waiting for this one to move,
at any moment. 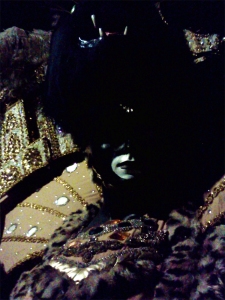 Zulu close-up.  If he HAD moved, I would have
begged him for a famous Zulu coconut.

And of course, they have the give-kids-nightmares dungeon of horror, as any good wax museum should! 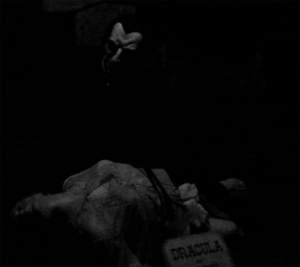 At the very end, on the way back into the lobby, the self-guided tour ends with this guy.

He seems out of place in the hall of New Orleans history, but he actually ties in rather well.  If you want to know how, you’ll have to pay the museum a visit, as reading his sign got a chuckle out of both of us, and I wouldn’t want to ruin anyone’s opportunity for a moment of sudden laughter.

The museum may be a little careworn around the edges, the wax statues not as high-end as some out there, but the Musée Conti is definitely worth checking out – for fun, a little bit of education, and as a great and inexpensive respite from the beating New Orleans sun.