Happy Mardi Gras, world!  Greetings, from my desk, for I am at work.

Just about everywhere else, save for New Orleans and other places along the Gulf Coast, today is just a Tuesday.  The same holds true where I’m at…but I’m doing the best I can.  I’ve got the Mardi Gras Parade Cam running, via nola.com, where I will shortly get to watch Rex roll from afar.   I really really really wanted to see Zulu.  However, that was 7:00 a.m. our time, and I was still running around getting ready for work.  Alas.  I’ve also got my Rebirth Brass station on Pandora streaming from my phone.  And, I dressed for the occasion, work or not.

I also, per tradition (I think this is my 3rd year), brought a King Cake in to work, baby and all.  This year, I’ve been too preoccupied to bake one myself, so I decided to experiment by purchasing one of the boxed cakes from the King Soopers grocery bakery.  Bad idea.  I can now say, officially, while choking down the piece I cut for myself, that it is naught but a glorified cinnamon roll.  And dry, dry, dry.  Oh, Colorado, I may not be Catholic, but I so look forward to giving you up for Lent! 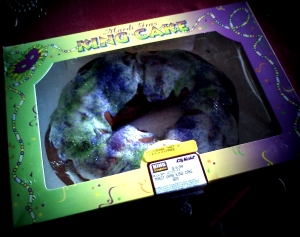 But, dry or not, there’s fun involved.  Again per tradition, I have made a “King Cake Mardi Gras Mix” CD for the coworker who gets the baby.  There’s good stuff on there.  So, all is not lost. 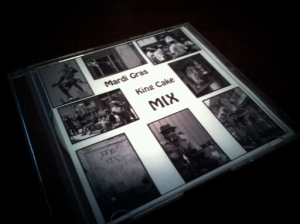 Ridiculously, there will be no boogying this evening, either, really.  Our old favorite bar that we used to love to haunt had a great Mardi Gras shindig every year because the gentleman who owned it was into the culture enough to try to do it up at least as right as possible.  The place has new ownership, though, and you can’t pay me to go there again.  I suspect J and I will have a couple of Sazeracs apiece at home, and call it a night.  I have a Board meeting tomorrow.  Really?!  Really.

That being said, we’ve got a Mardi Gras Party coming up this Saturday, and that will be fun.  Weird to be doing that after the holiday, but it is what scheduling dictated.  Meanwhile, J and I had a wonderful, small, peaceful little private dinner this past Saturday with some friends of ours and their kiddos, and it was fantastic.

I cranked up some music, again via my phone.  Upon walking in the door, LO!  King Cake, glorious King Cake!  My friend Phil makes UHmazing King Cake.  I’d been craving the stuff since the start of the year, so it was hard to focus on dinner first.  I just really kind of wanted to stick my face in it. 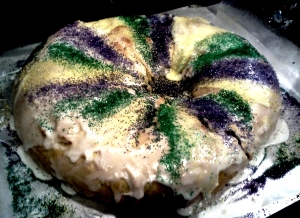 On the way there, we found some really cute Mardi Gras bouquets, with a little mask included.  We picked one up as a hostess gift.  M was happy about flowers, and my wee best girl S discovered that the mask was the PERFECT size for her face.  It was confiscated by her rather quickly, and became the favorite plaything of the evening. 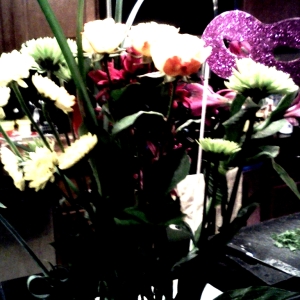 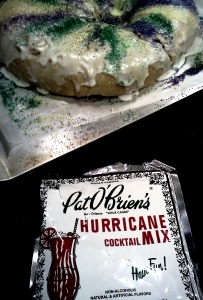 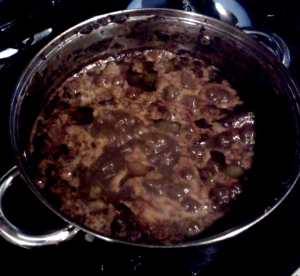 Poboys were shoved into faces. 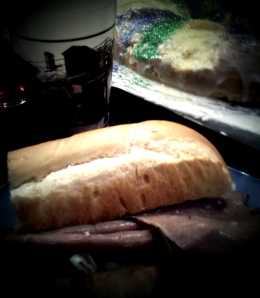 Tummies exceedingly full, we sipped beverages and chatted and hung out and had a good time.  Then, at long last, it was time to stick my face in King Cake.  Yippee!  They were bereft of a bitty plastic baby, so they used an almond in its place.  Guess who got the almond?? 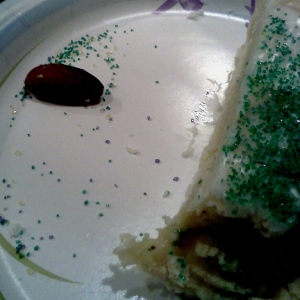 That’s right, ME!  That means it’s my turn to provide the next one.  Which will be next year.  I have full plans to ship either a Randazzo or a Haydel to them, from New Orleans.  Aw yeah.

So that is Mardi Gras for me.  Still waiting for Rex to roll on my little screen here…in the meantime, I’ll sit and watch the lucky people that I can see dancin’.  And crank up my music.