The Everyday.  Everyone has this, the everyday.  Those routines they follow, those things they do, what they walk past, what they see…those elements of every single day that become so commonplace that they scarcely get noticed after a while.

I had already been thinking, lately, of the Everyday, but now that J has an interview coming up, the reality of leaving what is deemed right now as Everyday makes what’s been commonplace, and sometimes dull, all the more poignant.  At least to me.  Thus, I’ve started collecting snapshots of normal everyday things, to have, to look back on someday when something else…a new city, a new routine, new things to walk past…becomes normal in its stead.

Like brightly autumnal colored fake flowers sitting in a pot on an apartment complex patio.  In all of the bleak and white of snow and grey of sticks poking up from trees into the sky, this caught my eye on the way to work yesterday.  Actually, I was so distracted by parsing the color that I was seeing that I stumbled on a ridge in the sidewalk.  So much for the dry stretches being “safe,” right? 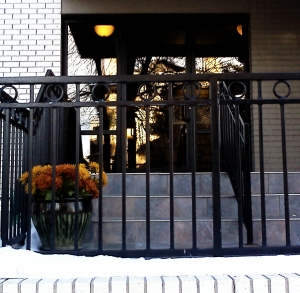 Or the gate on the side of my building, which I refer to as my “sneaky entrance.”  It’s more convenient than the front door, since I reach this gate from home quicker than I do the front of the building.  I think of it as sneaky, because I can be in the building for a long time before anyone knows I’m even in.  Flying under the radar can be nice sometimes, on those “need coffee” antisocial mornings.  This back entrance leads straight down to the break room.  And the holy coffee pot, of course.

Then there’s the coffee itself, not too bad for a less-expensive bulk office thing.  Of course, I’m so used to the taste of it that I’m always delightfully surprised when I actually have “good” coffee.  But, for morning survival, coffee is coffee.

It’s interesting, when one has an office, the THINGS that just accumulate in there.  I think I’ve had that lizard on my desk since…2005?  The beads are only a year old or so – some from my New Orleans-themed birthday cake from a coworker year before last, and some from the King Cake I made and brought to work for Mardi Gras last year.

It’s also funny how one begins to take for granted the place in which they work.  This is not always shameful, particularly if you’re in some sort of cookie-cutter building.  I, though, work in an old mansion that was built in the 1920’s by the Porter family, a son of which was marrying one of the Coors daughters.  After housing their families, it then belonged to the Archdiocese of Denver, and then eventually, down the line, was purchased by my employers and turned, respectfully, into offices.  It’s lovely.  And I could navigate around the house blindfolded, if I ever had to.  I’m glad I don’t have to, because even after 11 years I still live in fear of the stairs that lead from the 1st floor down into the board and break rooms.

And then, there’s lunchtime.  I always pull out the food of the day and settle at the table with my book of the day, into which I promptly shove my nose and proceed to, typically, drown out everyone around me for an hour.  Or I chat, when I’m feeling chatty.  This past week, I accidentally managed to have some sort of Tour of Asia with my meals…this happened because I was running late Monday, and did not have time to pack a lunch.  So I ordered chinese food instead.  (I’m not too lazy to go home at lunch…but it seriously freaks the dog out.)  In order to hit the delivery minimum, I wound up getting what I thought was enough to feed myself for that day, and the next.  When it got there, I found that they are ridiculously generous with their portions.  I had enough to last FOUR DAYS.  And that evening, J wanted Thai Basil.  *dies*  After pad thai on Monday, vietnamese beef that night, fried rice on Tuesday, and MORE pad thai on Wednesday, I was more than done.  Luckily, I had a lunch date out with my parents on Thursday.  Friday, I went down the scary stairs, tossed whatever was left, and happily had my plain ol’ lunch.  But yeah, talk about oversaturation.

So, I’ve been sleeping really poorly every night, lately.  Some of this is environmental, like my dog getting up and moving around every two seconds, that sort of thing.  But some of it is job-search/moving stress too.  At any rate, lunchtimes have been knocking me out.  I do my thing, eat read etc., and then I go back to my desk in some sort of sedated naptime haze.  Despite the fact that I shouldn’t, yesterday found me back down at the beloved coffee pot, at around 3:00  in the afternoon.  I don’t do that afternoon coffee thing very often.  But thus, my day at my desk ended fairly much as it began.

And that is some of my everyday.