Eleven days ago or so, I proclaimed that I would soon purposefully reroute myself during one of my many roamings in order to walk up Sherman St. The purpose of this was to revisit Poets Row and the Arkhamesque-looking apartment building.  True to my word, I actually did, not too long after I said I would.  I’ve been preoccupied, though, so I simply had not put this together yet.

I can’t remember the causes, now, but the day that I wandered up there was a day that contained a LOT of walking for several different reasons.  I had forgotten something at home that morning, so a trip back to the apartment over my lunch break was in order.  Instead of taking the quick path between work and home, I decided it was a good and leisurely time to hit Sherman St. on the way.  So I did, and I’m glad.

And then I made my way to the 1000 block of Sherman St., which houses Poets Row.   After avoiding what I thought was some crazy guy walking up the street shouting out loud to himself (and who turned out to simply be talking into his phone ear thing…I hate those things, they fake me out every time, especially when the user’s hair is long), I wandered up one side of the block, crossed the street, and then walked back down the other side.  My journey up the street included a memory-filled pause and a sad smile at the Emily Dickenson building.  It also involved stopping at every single building to capture the signs, much to the consternation of a couple of people who were out enjoying the (now-missed) unseasonally warm and beautiful day.  I figured if anyone actually asked me what on earth I was doing, I would mumble “Art Project” and keep moving.  Heh.  Close enough.

As it turned out, the building that was described to me as “Arkhamesque” and which has the Creepy Elevators was on the same block as Poets Row.  I had no idea. After shooting one side of the block, I paused to get Arkham before resuming with the Poets. 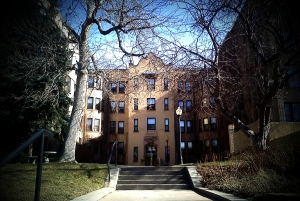 It DOES have a rather institutional look to it.  I can imagine it particularly does so, when the ivy is alive and green.

I’ve since discovered that Poets Row is considered to be part of the Sherman Street Historic District, and was listed on the National Register of Historic Places in 2004.  All of those places are the original buildings along that stretch, and built between 1929 and 1956.  I can tell, just from looking at the architecture with its Art Deco flair.  The majority of the buildings were designed by architect Charles D. Strong.  It is said that he was a huge lover of poetry and literature, which may have been the inspiration for the naming of the housing units.  Pretty neat stuff.