When I turned 30, a decade ago (holy crap), my friends got me a Harry Potter cake. Apparently, the salesperson at the grocery store looked at them askance when they told them how old I was. They probably thought they were decorating a cake for an 11 year old. Which is fantastic, because…

Ten years later, I JUST spent the last vestiges of my 30s (by a couple of weeks) wandering around Diagon Alley and Hogsmeade with J. And it was one of the most joyous moments of my entire life.

I’ll never grow up. And I’m glad for that.

You know what else I’m glad for? My husband is never growing up, either.

You see, we’re not just fans of the HP books and films. Because of our involvement with the Avistrum Academy of Sorcery, we are downright scholars. We’ve lived in this world for about 15 years. It’s kind of a key part of our existence.

So, a few weeks ago, we mapped out a plan, got in our Muggle vehicle, and drove to Orlando.

It’s really very difficult to describe the whole experience. JK wrote it all best though, and, since we lived everything she wrote,  the following just about sums it up:

“It was as though an extra house had inflated, pushing those on either side out of the way. Harry gaped at it. The stereo in number eleven thudded on.” -Order of the Phoenix 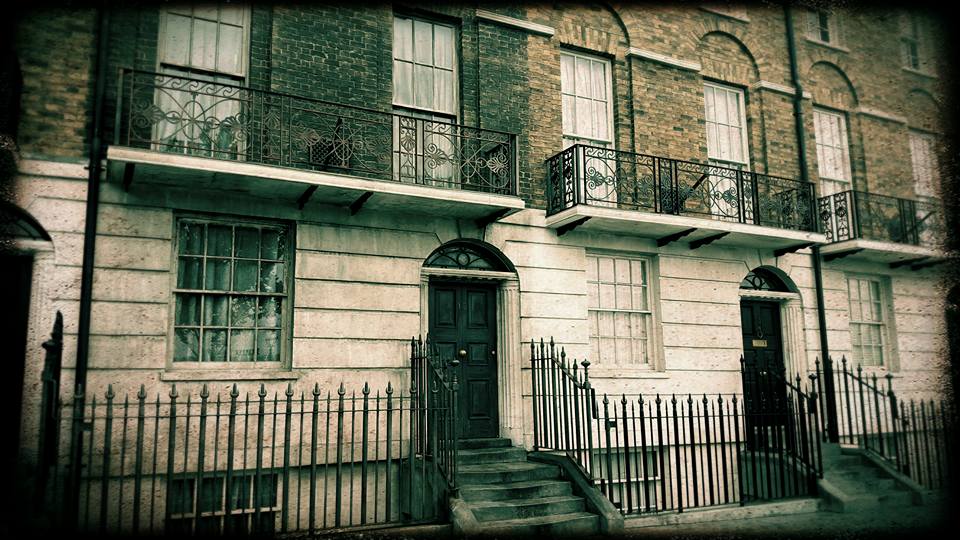 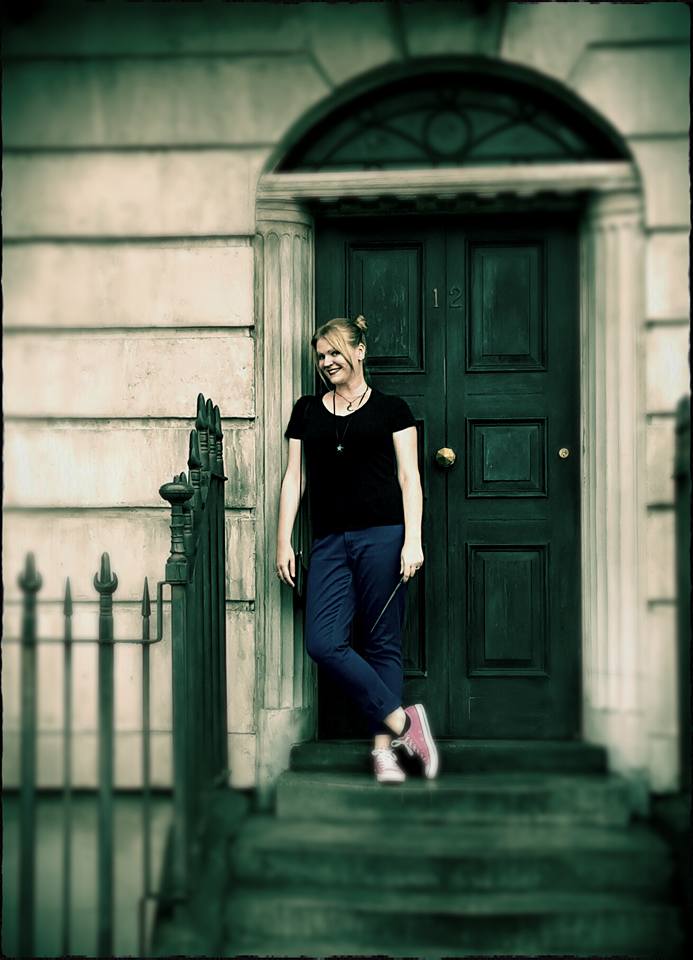 “Welcome,” said Hagrid, “to Diagon Alley.”
He grinned at Harry’s amazement. They stepped through the archway.

“Harry wished he had about eight more eyes. He turned his head in every direction as they walked up the street, trying to look at everything at once: the shops, the things outside them, the people doing their shopping.” -Sorcerer’s Stone 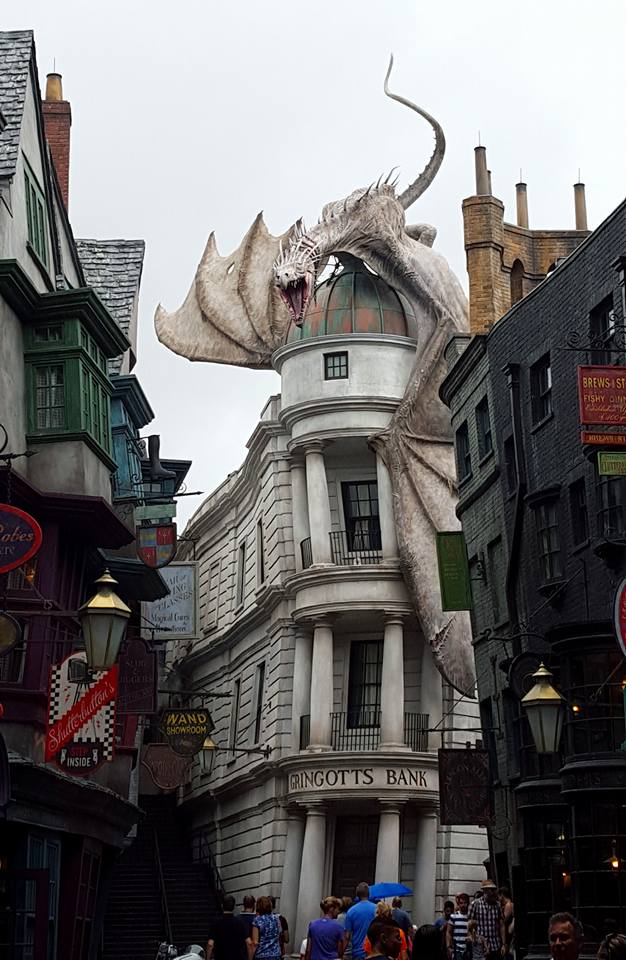 I mean, we’re talking Completely Overwhelmed and In Awe. We hooked a straight right into Quality Quidditch Supplies just to do some shopping and not hyperventilate. After that we still had to step back outside into Muggle Universal, just to center ourselves before going back in!

“Clutching his broken glasses to his face, Harry stared around. He had emerged into a dingy alleyway that seemed to be made up entirely of shops devoted to the Dark Arts.” -Chamber of Secrets 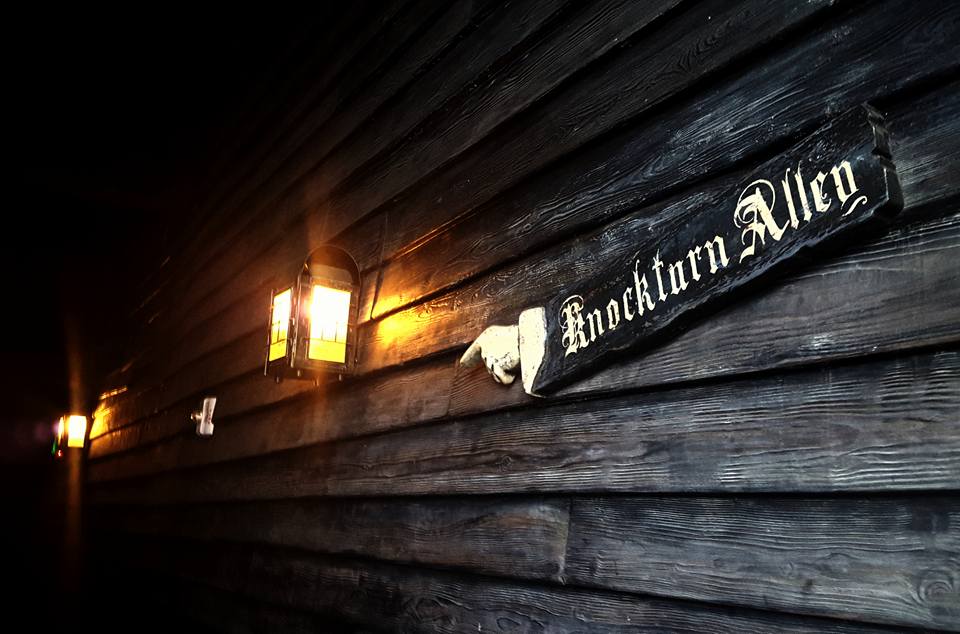 “The one he’d just left, Borgin and Burkes, looked like the largest, but opposite was a nasty window display of shrunken heads and, two doors down, a large cage was alive with gigantic black spiders.” -Chamber of Secrets 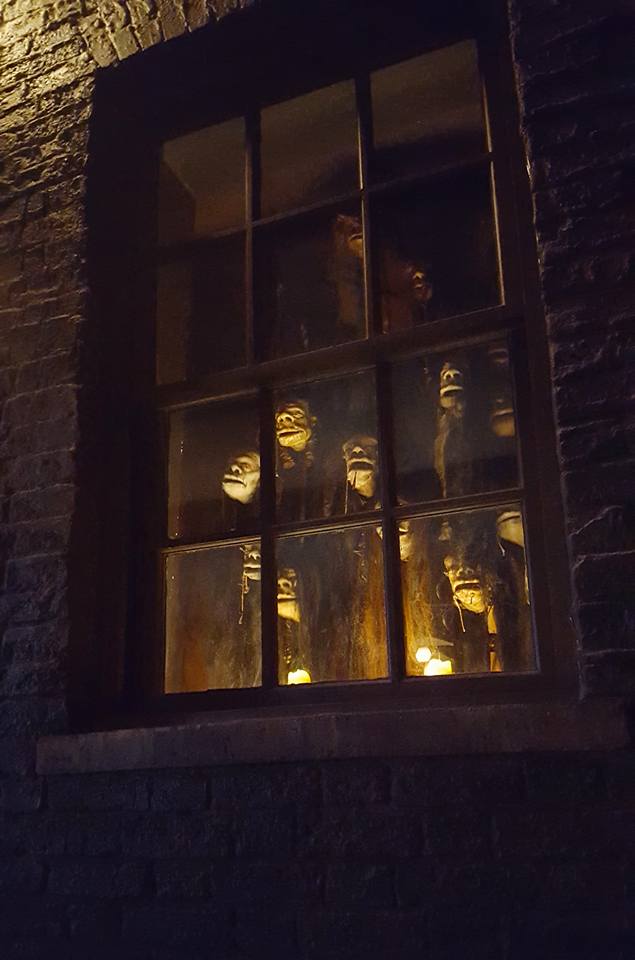 “And unless Harry’s ears were deceiving him, the old radio next to the sink had just announced that coming up was ‘Witching Hour, with the popular singing sorceress, Celestina Warbeck.” -Chamber of Secrets 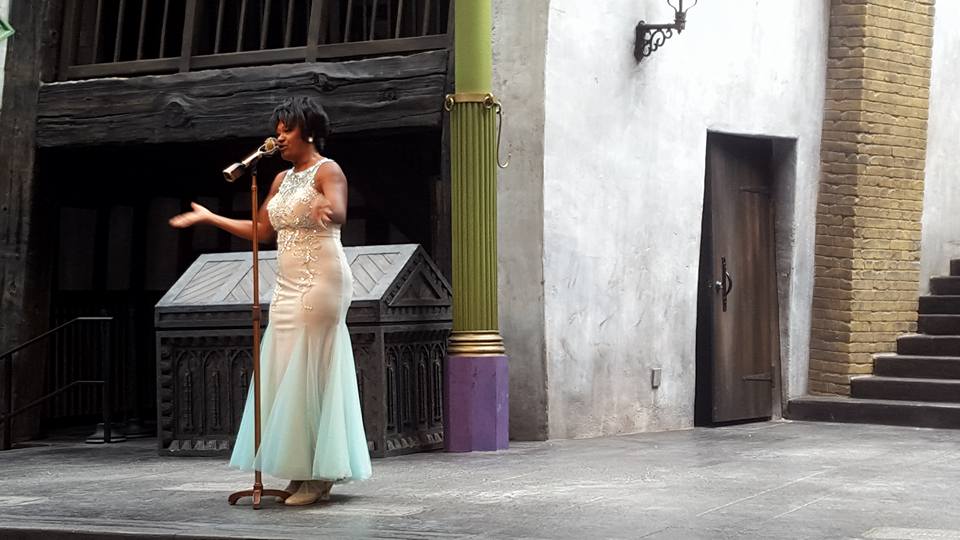 On the Hogwarts Express:

“A scarlet steam engine was waiting next to a platform packed with people. A sign overhead said Hogwarts Express, eleven o’clock. Harry looked behind him and saw a wrought-iron archway where the barrier had been, with the words Platform Nine and Three-Quarters on it. He had done it.” – Sorcerer’s Stone 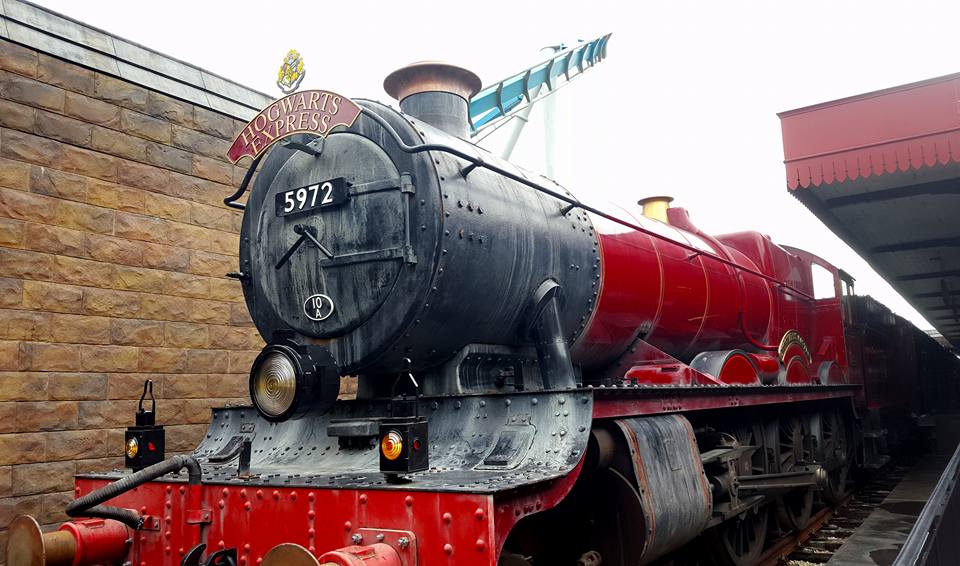 “Yes, but – ” Hermione seemed to be struggling to find another problem. “Look, Harry still shouldn’t be coming into Hogsmeade. He hasn’t got a signed form! If anyone finds out, he’ll be in so much trouble! And it’s not nightfall yet – what if Sirius Black turns up today? Now?”

“Hogsmeade looked like a Christmas card; the little thatched cottages and shops were all covered in a layer of crisp snow; there were holly wreaths on the doors and strings of enchanted candles hanging in the trees.” -Prisoner of Azkaban 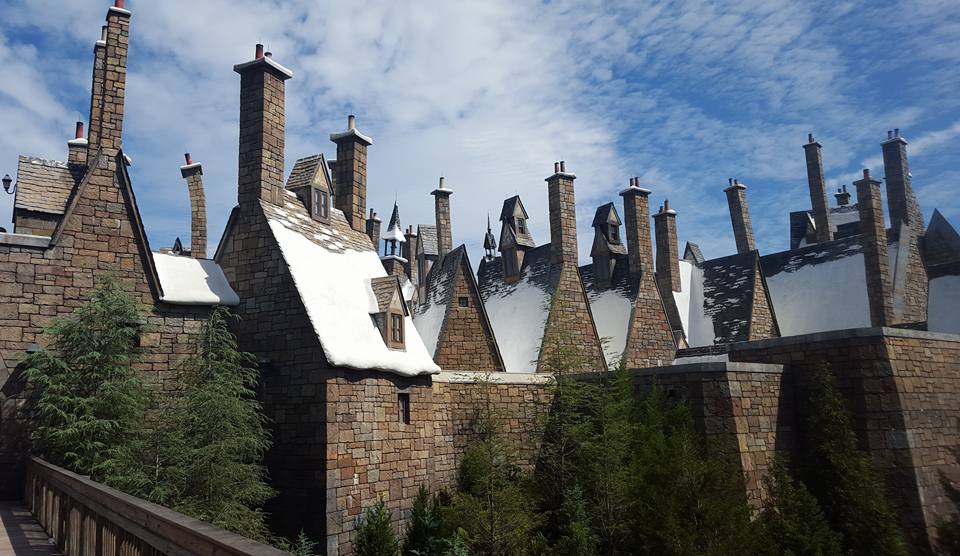 On the Public Conveniences:

“Harry and Ron joined a number of oddly dressed men descending into what appeared to be an ordinary underground public toilet tiled in grimy black and white.”

“He reached up, pulled the chain, and next moment had zoomed down a short chute, emerging out of a fireplace into the Ministry of Magic.” -Deathly Hallows 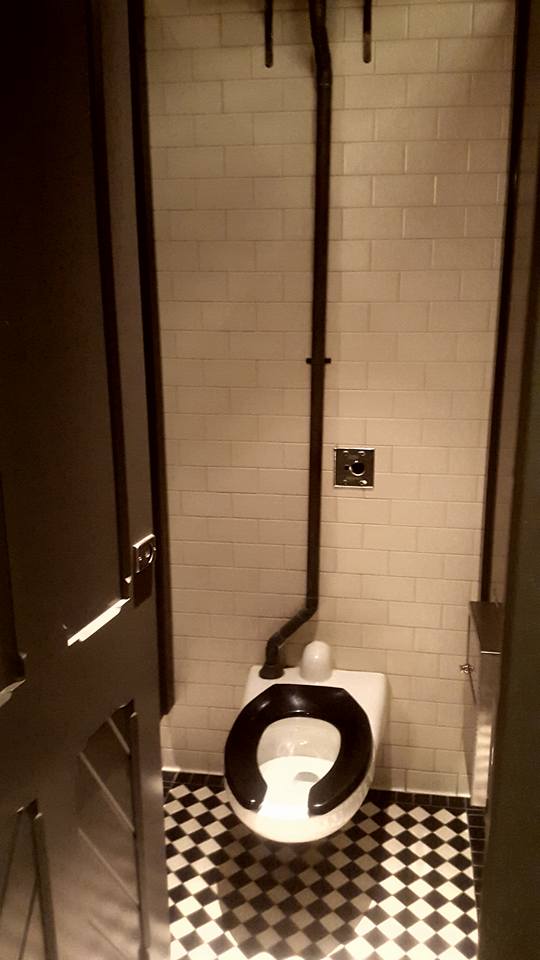 “Instead of the usual display of gold-embossed spellbooks the size of paving slabs, there was a large iron cage behind the glass that held about a hundred copies of The Monster Book of Monsters. Torn pages were flying everywhere as the books grappled with each other, locked together in furious wrestling matches and snapping aggressively.” -Prisoner of Azkaban 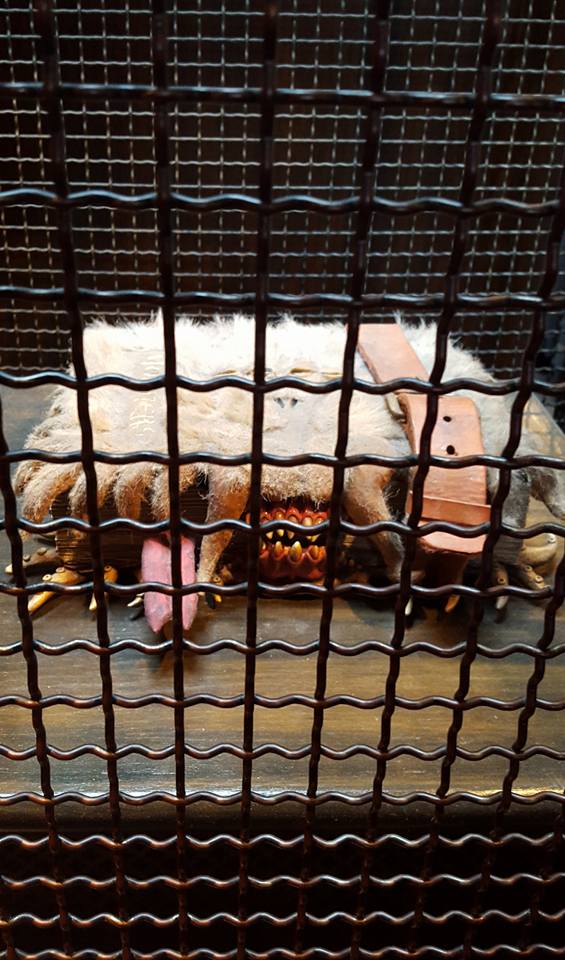 On the Best Class Ever:

“Hippogriffs,” Hagrid roared happily, waving a hand at them. “Beau’iful, aren’ they?” -Prisoner of Azkaban 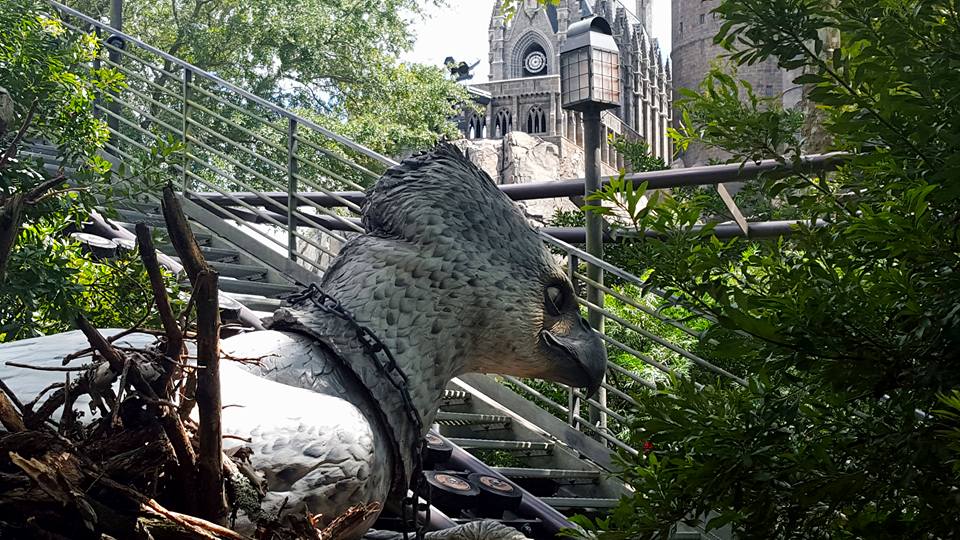 Yes, Hagrid. Yes, they are.

And, finally, on Hogwarts:

“The narrow path had opened suddenly onto the edge of a great black lake. Perched atop a high mountain on the other side, its windows sparkling in the starry sky, was a vast castle with many turrets and towers.” -Sorcerer’s Stone 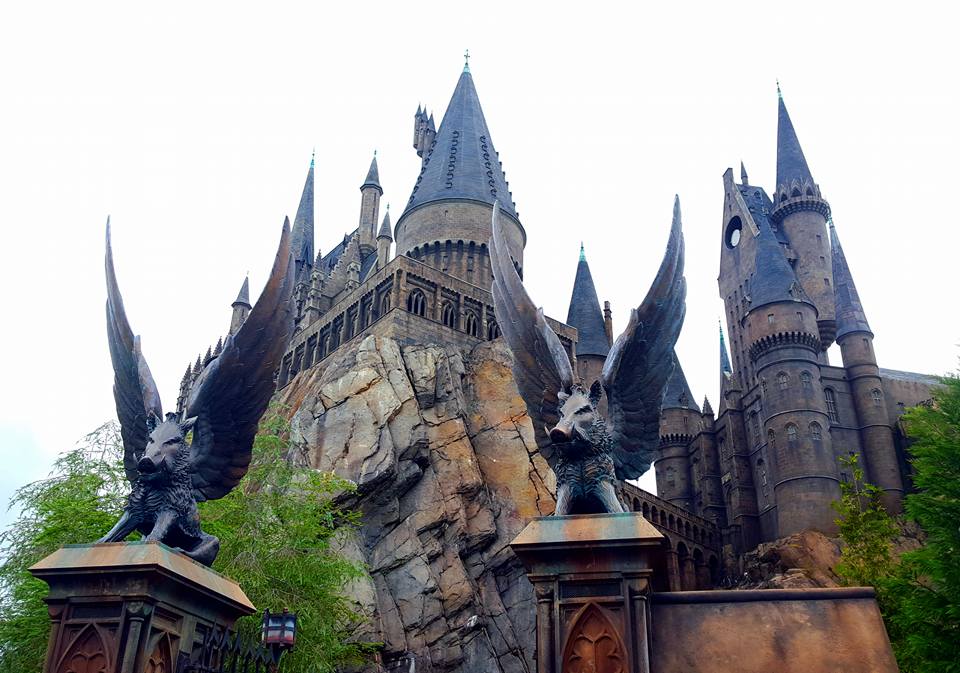 That was the most magical time of my life.

And there was SO much more. For a complete picture of our Wizarding adventures, check out my full gallery here.

Age is in the eye of the beholder, guys.

I’ll always be, at least in my head, as young as Harry was when he got his first letter from Hogwarts.

Happy birthday to me!  Now, off to see about Hagrid’s birthday cake.  He may have sat on it, but it’ll taste fine, just the same…