It’s hot.  I mean, really hot.  It’s so hot that when you step from the shade across that Great Divide into the spot where the sun hits the pavement, you just wanna shrivel up.  Except that you can’t shrivel up because the humidity plumps you back out again.

It’s the kind of hot that makes me want to stay in the shade on my hot-ass porch, drink my cold-ass wine, and listen to Robert Johnson while the sweat trickles down my back and soaks into all the smooshy spots my dress touches.

Which is what I’m doing right now.  Hot-ass porch, cold-ass wine, dress-sweat, and Delta Blues.  And while I revel in all that, I reminisce on all those days where it wasn’t too hot to take a walk.

I keep a gallery on Facebook called On the Way Home, where I hold all the things I’ve captured while walking, streetcar-ing, or driving home…usually from work, but also from various doc offices, or whatever.  The key thing is that it has to be a photo I took while I was on my way home from somewhere.  Occasionally, I like to gather up my favorites and share them here.  Here’s The Way Home #1, and The Way Home #2, if you want to look back on ’em.

It’s been a while since I’ve done one, so I figured it was time to pull up a few more.

First, here are the last couple of photos from when I used to take the streetcar after work every day, disembark early, and wander home through our neighborhood:

I’m a big plant person, so while I’m eyeballing weird street art and cool houses and cracks in the sidewalk bricks, I also notice what the wild local flora is doing.  One day, walking down some street somewhere near the park down the street from my house, I spotted these creeping vines growing up a wall which surrounded some big house or another.  Like they were trying to get in.  Slowly.  Patient infiltration. 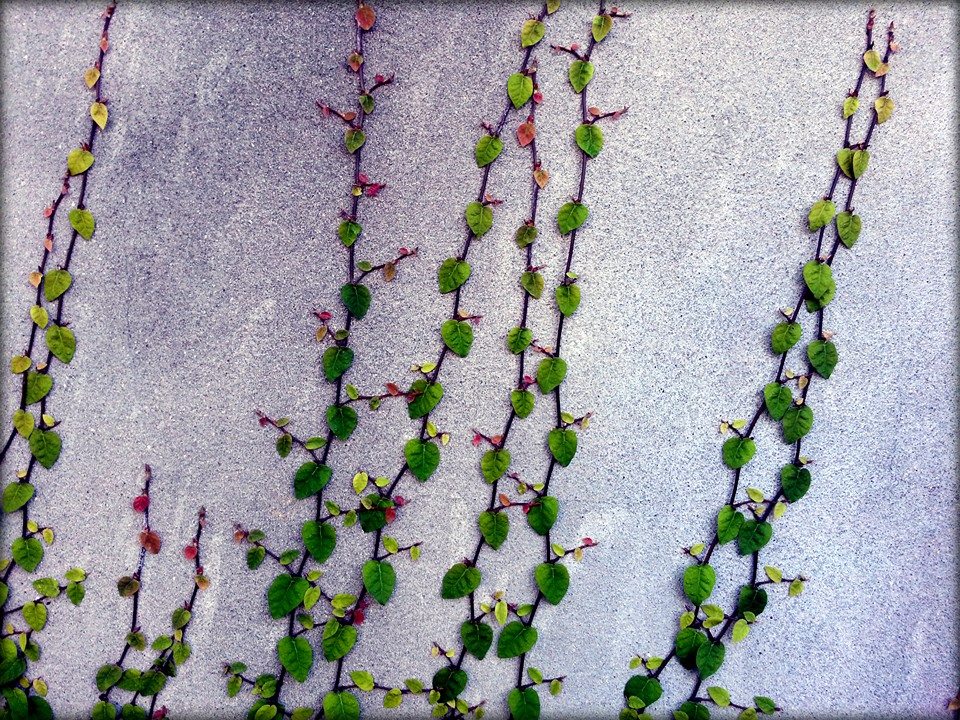 I also used to cut up Melponene a lot in those days.  It has stoplights, which makes it easier to cross the street during after-work traffic.  Before I ever moved here, I had a dream about Melpomene St.  At that time, I had no idea such a street existed and I woke up with that strange name rolling off my tongue like I’d always lived here.  I was so sure of it that I had to pull up a map and do a search for it.  Sure enough, it was real.  I still wonder what connection I will someday have to that particular street.  For now, it’s just a few blocks away, and someone interesting lives there who has this cool little Gypsy-esque gal out front, always guarding their door.

Last summer, J started working downtown.  My life as a daily Streetcar Commuter came to an end as a result – we carpool now.  Bittersweet, BUT.  I have to confess I don’t miss a lot of things about it, like the long waits and the steamy days like today where you finally get on and it’s packed to the gills like a steamy sardine can.

Anyway, from last summer through this past Mardi Gras, I was working with a Shrink on my various anxiety issues.  He was located downtown at Magazine and Poydras and, before winter rolled in and suddenly it was dark by the time I got done with my appointment, my new tradition became the Walk Home.

The Walk Home was awesome.  I would amble up Magazine St. from downtown all the way home.  It was an approximately 30-minute stroll, and it gave me the opportunity to pontificate on what the Shrink and I had talked about that day and mull over his advice.  It also provided a fresh scene, new things to look at.

Sometimes you don’t notice things that you pass by all the time, until you’re coming at them from a different angle and a from a new perspective.  One evening, I cut up to Prytania from Magazine, probably just to make the walk a little longer as I had a lot to pontificate upon.  I passed by this one little kooky bed and breakfast joint that has this garage-thingie attached to it.  The garage-thingie is used for socials and rummage sales and other neat-sounding things I’ve heard about in passing.  I’d seen garage-thingie a ton, on all those walks from the streetcar when we used to have to get off early.  But for some reason, that night, it jumped out at me.  I recall feeling relieved that evening, and I think I was receptive to the happy colors.

The WWII Museum is one of my favorite places on earth.  And my favorite place within this favorite place is their Victory Garden, which you can see from the street when you’re walking by.  It was my personal tradition, after appointments, to stop at the gate there and peer through into the Victory Garden, to see how the plants were coming along.  How high’d the Rosemary get in this past week?  Hey, check out that basil!  The cool thing is, they use all those garden goodies in their restaurant.  Then one day, I noticed the place next to the Garden and the back patio of their eatery.  I found out later that this place houses a couple of private dining rooms that you can use for events.  But at that moment…

Walking up ‘Zine St. from downtown, you hit some rough-n-tumble areas right there near the overpass.  Not particularly the kind where you worry, when it’s light out.  But it’s just more…jaggedy, or something.  Urban.  Real.  Time-travelly in its own right – like, skip to 1957 or somesuch, and Neal & Jack are rolling their Slow Boat to China up to this auto shop and blowing the horn. 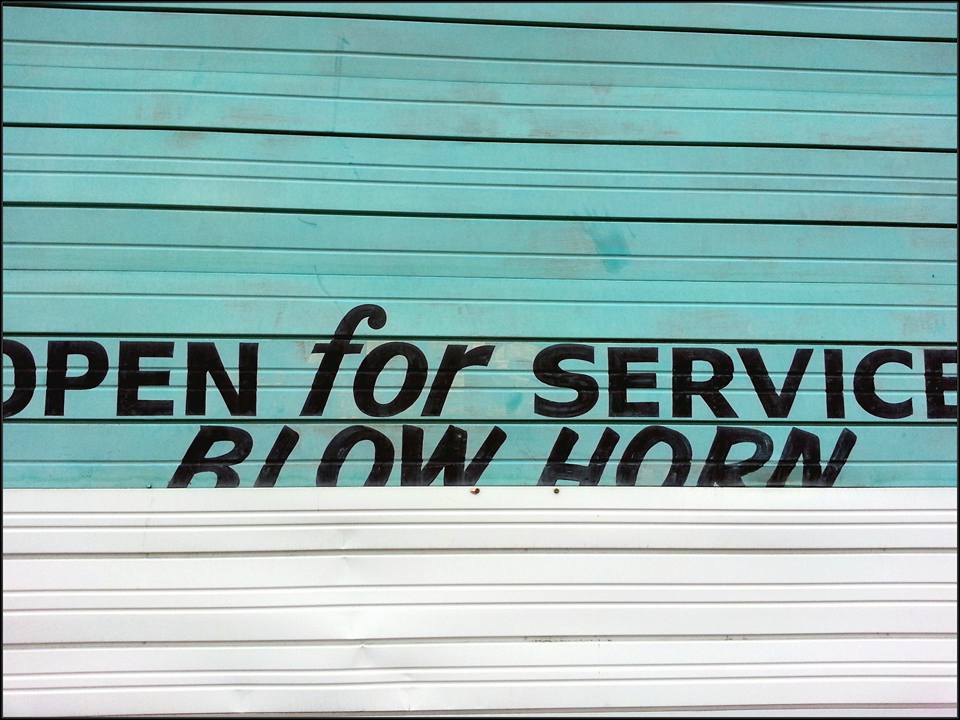 Meanwhile, there’s the street art.  There’s ALWAYS the street art.  There is a lot of graffiti here, and I mean that in the classic non-awesome way.  A LOT of graffiti.  But, keep your eyes open and you see stuff like this on the sides of electric boxes – you can’t miss the Shakespeare reference here.  Much Ado About Nothing, Dogberry: “But masters, remember that I am an ass, though it be not written down, yet forget not that I am an ass.” 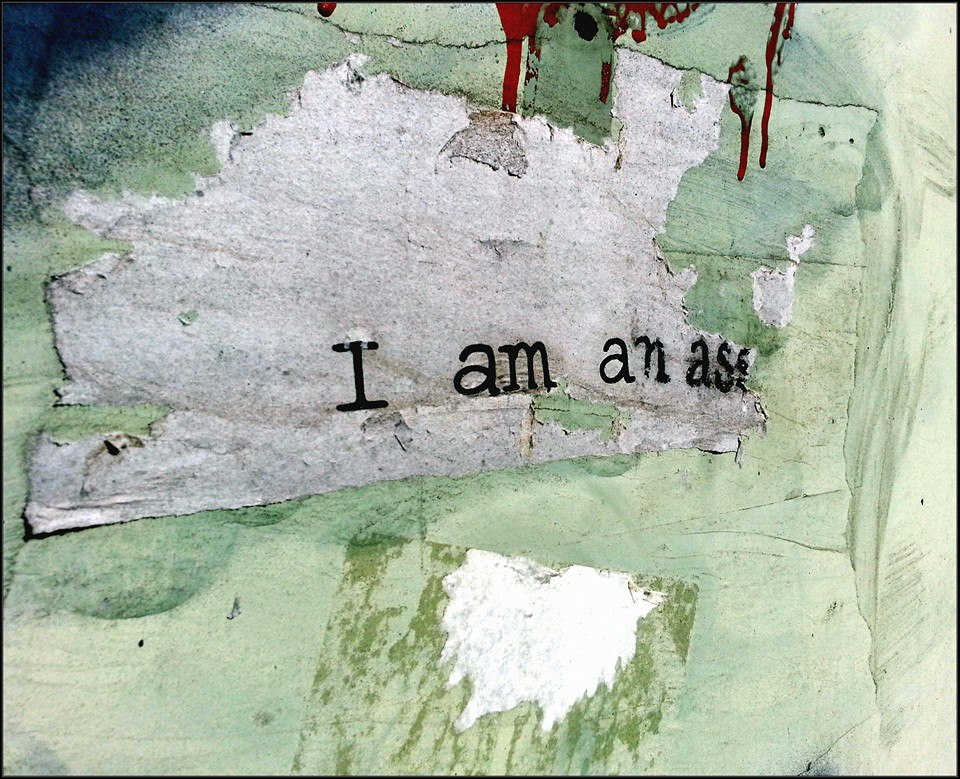 I often wonder which was more therapeutic – the Shrink, or the walks home?  I think they went hand-in-hand.

Nowadays, the opportunities to Capture Something on the way home have minimized, mainly because most photos taken from the window of a car look kind of cheesy.  But one evening, J and I were On the Way Home, and we got stuck in classic New Orleans Traffic.  It’s not everywhere that you see this sort of thang through your windshield.

Even more recently, aka this past month, I had a stint of Working Late.  This put me back in my old streetcar routine, and while it reminded me of why I’m grateful I no longer have to do that every single day, it was also kind of nice to have my feet on the street again.  This particular day, waiting at the car stop on St. Charles at Union St., I was amazed to capture an opportunity where there were NO CARS.  A lull in traffic.  A quiet gap.  Rare. 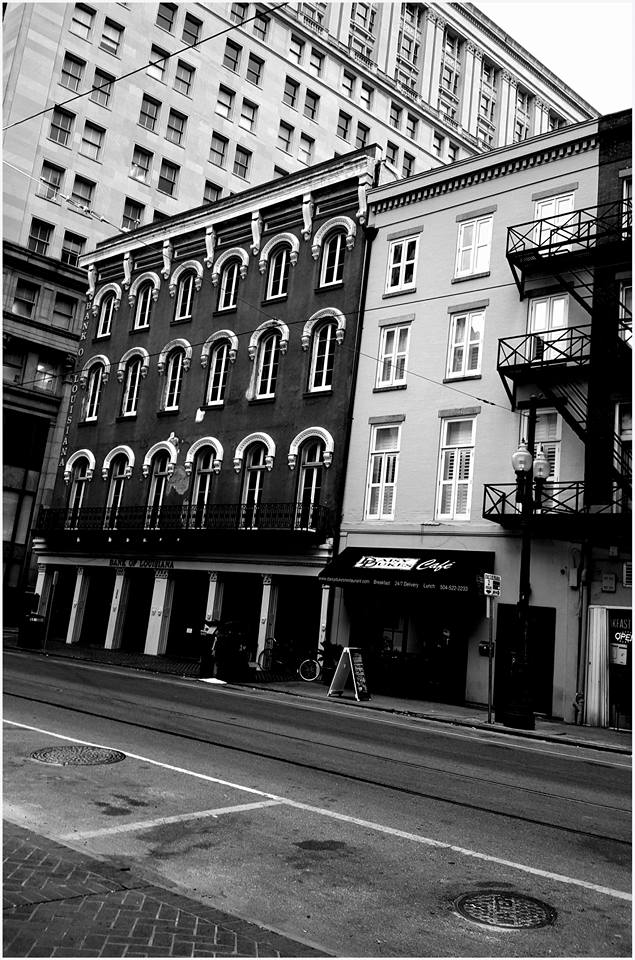 Last, but definitely not least: week before last.  I left work early for a consultation appointment with an oral surgeon to discuss my Wisdom Teef.  (Only to later discover that they don’t take my insurance.  My regular dentist referred me to someone that doesn’t.  Take.  My.  Insurance.  Idiots.)  Needless to say, my Teef removal is on hold.  However, at that time, coming out of their office with a date scheduled and after having learned of all the things that would happen and also all the things that could go wrong, I was really, really nervous.  This office was up by all my other docs on Prytania at Louisiana St.  And rain or shine, heat or no, I always schedule my doc appointments in the afternoon so I can walk home after.

I was surprised, when I ambled up Prytania and reached Washington, to see that Lafayette Cemetery was still open.  By my clock, they should have closed about 30 minutes prior to my wandering arrival.  Nothing calms me down like our cemeteries.  Nothing.  They are so peaceful to me.  So I took a shortcut, veered in through their open gate, and took a circuit around.

I felt much better after that. 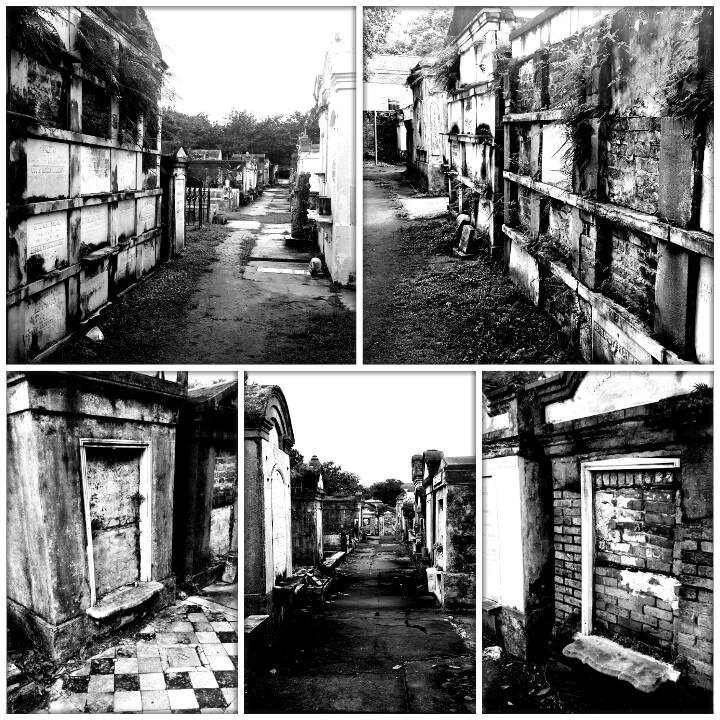 That catches us up, y’all.  I have another album I keep, called “Wandering,” that I may have to dive into next time.  That’s the one that houses all the photos I take when my feet are on the street while I’m NOT on the way home.  So, until next time.

PS: The Dawg Days comic was on a hiatus this week, as my fuzz-faced little Muse wasn’t doing too hot and was in the hospital and everything.  I felt bad essentially making fun of her while she was all pitiful.  All is well, however, and Dawg Days will resume soon!

Featured Image: Another piece of street art I captured on one of my post-Shrink walks.  Just off Magazine St. as you get into our neighborhood.  WORDS TO LIVE BY!