I’m not talking about that moment where you’re sitting comfortably at a table in a pub, drinking pints, and suddenly all that fine liquid barley catches up and you suddenly REALLY have to pee and end up forfeiting a great conversation for a mad dash to the loo.

Although you should listen when nature calls that way, as well.

Rather, I speak of forests and swamps and trees and critters. The smell of woodsmoke at a campsite. The rustling sound of wind in treetops. The clattering of Magnolia leaves like pebbles rattling down to the ground in the autumntime. Mist and fog and rain and the warmth of sun on the top of your head.

J and I just got back from a whirlwind weekend trek to Houston, for his office Christmas party. The whole way there, I gazed out the windows, staring into the trees lining the side of the interstate. Our journey out yesterday was particularly magical. We hit the road just in time to travel through the foggy morning, and the mist stuck with us all the way to the other side of Grosse Tete, where the fog became rain, and then turned into sun.

Fog is my favorite Weather. It’s one of those moments that the Druids called an in-between place. Anything can happen, in the fog. Once you walk out into it, you wonder where you’ll come out. Think of Mists of Avalon, of fairies and elves in green ferny woods, gateways and doors to other places. That’s what I feel like, in the fog. Just like the in-between times, dawn and dusk. Those blue hours where it’s neither night nor day.

View from the road yesterday, whilst stuck in a wreck-induced traffic jam.

Anyway, of late nature has been calling at me, HARD. And I don’t have to pee (at least right now), so I know it’s the other kind. After some road-staring pontification, I think I’ve figured out why.

When I lived in the deserts of New Mexico, I was out in it all the time. I knew the plants, and the animals, and the (shudder) bugs, and it was familiar, and home.

When I lived in a city surrounded by the Rocky Mountains of Colorado, I spent a lot of time hiking, and camping. I knew the plants, and the animals, and the bugs. It was familiar, and it was home.

Now I live in a wonderful and exciting bowl, surrounded by the swamplands of Louisiana. It has taken me two years to settle and I’m ready to get back to my soul roots. I’ve always said that nothing makes my heart sing like the sight of moss hanging from trees, and it’s true.

Thanksgiving weekend, while the masses were out killing each other over cheap televisions for “Black Friday,” J and I joined the folks in a trundle around Fontainebleau State Park, just up the road from their house. I stared into the trees and walked the shore of Lake Pontchartrain and hugged a long deceased but still standing Cypress and something kind of just…clicked, in my gut.

While we were out there, we scoped out the tent sites for camping. While I would much prefer to wander out into the middle of the woods and set up a tent where I durn well feel it’s suitable, my instinct tells me that would be a less favorable idea down here. 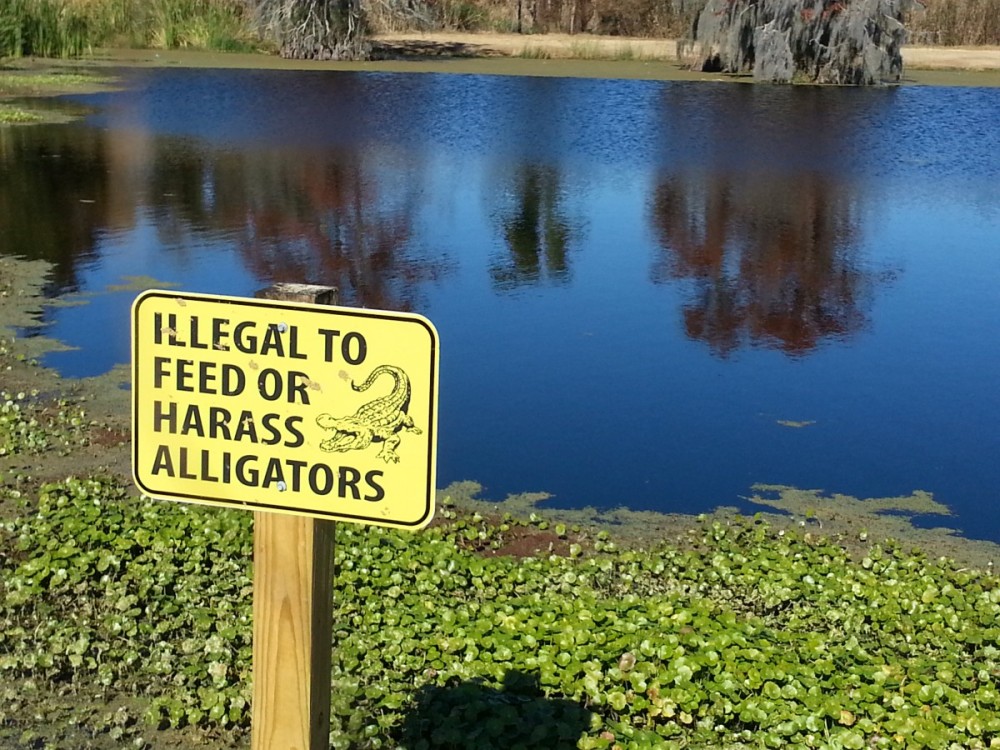 Why it would occur to anyone to either feed or harass a gator is beyond me. Except that humans often come in foolish varieties.

So a campground like Fontainebleau seems like a good way to start. Their tent spots are, at least, nestled away from the road and not right next door to each other. Eventually, I want to check out everything, everywhere, and find the wild places. I also look forward to camping at at the Renaissance Festival next year.

But, but, but…we camped frequently enough in Colorado that our old loyal tent had become quite dead. So what to do next?

The other night, I came home from work to discover a Christmas present from J. A new tent. And camping reservations at Fontainebleau for the first weekend of January. Best Christmas present ever, and a really really good way to start a new year.

And so, let the adventures, and the learning, begin.