Last weekend, J and I were driving down St. Charles Avenue and saw just about everyone out at Audubon park, wearing shorts and t-shirts and playing volleyball.  Later on, last week, I was meandering through the garden center at Home Depot, the sun a gentle-warm on my back, the breeze wafting the smell of blooms to my happy nose.  During both instances, I could not believe that it was Thanksgiving-time.  That I was seeing these things and running around barefoot in tank tops in late Autumn.  These are spring things for me, but it is Fall.

I have officially decided to name this sensation Seasonal Confusion.  Not too different from Soul Delay, in a way, except that my soul is right here with me and as happy as can be.  Rather, it is merely a feeling of absolute awe that, during a time of the year where I would normally be all bundled up and cold and pitiful and griping about the bitter cold and snow, I am doing Spring Things.

It. Is. FANTASTIC.  And I love it!  It’s that time of year down here where folks CAN actually go outside and play.  No more withering heat or smothering humidity.  It is often warm but not oppressively so.  Or, like today, the rain has been pouring down and it is muggy and far cooler than it has been…but I’m still wandering around outside barefoot, stomping in the mud.  Happy happy happy.

Not too long after we all moved in, this little guy bloomed.  In November.  I will be
fascinated by this for a while.

I can’t believe that a month has gone by since I went off the grid to get ready to journey back down here to Louisiana from Colorado.  It has been a busy and productive time – we got our internet connection last week, so I’m not TOO late getting back here, I don’t think.

Anyway, greetings from Mandeville, LA, where J and I are staying with the folks until we get on our feet.  I’ve grown somewhat weary of the whole Recap My Entire Trip and Everything Since I Last Wrote process, so I’ll summarize some highlights, get us all snuggly and caught up, and then move forward with some writing-normalcy.

J and myself and the dawg and Infamaus and Cootie struck forth, on Halloween Day, in a convoy consisting of one minivan, one shorter Uhaul with a car attached to the back, and one far more huge Uhaul – a 26-footer, to be exact.  Guess which beast I drove allll the way here?

The hugest one!  I put my name in the hat for the big one, since I never proved very capable (on our last haul) in the one with the car tethered to its behind.  I’m kind of proud of my truckerly self for handling that big ol’ thang, with little to no incident.  Save for trundling the monster through a very hectic Dallas, whereupon I was sideswiped by a trucker of the jerkier and bullier sort.  I was fine, but he knocked by passenger-side mirror out of whack, which meant that I had to navigate through Dallas while unable to see anything on my right side.  J was behind me and served as my spare eyes whenever we had to switch lanes – we had walkie-talkies in each vehicle, which were a godsend…and pretty fun to talk through, to boot.  Without those radios, Dallas would have been impossible.  Can you imagine trying to get through that city in the middle of the day in a big ol’ truck without being able to see anything behind you?  Nightmare.  But, we made it.

Infamaus proclaims the entire trek down here to be a blur, and I have to say I agree with him.  Things have shuttled along SO quickly in the past month that it really does seem a million miles away already, despite the fact that we have been here for only a little over three weeks.  We stayed in Wichita, KS the first night.  Then hauled down to Palestine, TX and visited my aunt (which totally ruled) the second and third nights.  And then we rolled into Metairie after that.

Getting back was WEIRD.  J and I were back in Metairie, just up the street from the place we stayed for three months.  It felt like we never left.  Felt like that when we went to the Quarter for the first time too, save for some differences, but that’s another post.  Really, though, getting back here felt NORMAL.  Like the summer in Colorado was one big crazy dream.  Pretty wild stuff.

So, in one mad whirlwind, we made it here and THEN within our first week we got all our stuff out of trucks and into storage units and then home-hunted with a flaky realtor and THEN found a place for the folks (and us for a while) on our own instead, and THEN moved in.  The place we found is in Mandeville, as it is quiet and green and pretty and suits the folks far much better than the mayhem of the New Orleans metro area.  Although I’m eager to get my roots planted in the city proper, I AM glad to be up here on the Northshore for a while because it gives me the chance to explore this side of the lake a little more in depth that I think I ever would have otherwise.  So, pretty cool.

This is what it looks like on our street.

This is the old shed in the huge back yard.  Fairly useless for storing anything
safely, but picturesque nonetheless.

The house and grounds are pretty awesome – the only issue is that, in this duplex, the walls are paper-thin and the neighbor has a proclivity for slamming her door all the time.  And her 5-year old does not know how to speak in any tone save for yelling.   Things to deal with, but otherwise it seems to be all good here.

We got a majority of the folks’ boxes unpacked in about three days.  Now, we’re down pretty much to books that they need shelves for and that’s about nearly it.  Like I said, we’ve been whirlwinding down here!  Meanwhile, I started my bookstore job in Metairie (hurray for transfers) and J and I both got signed up with a really good staffing agency.  He’s got a temp job going on in the CBD right now.  I have pending interviews through them AND the staffing agency I was with down here earlier this year (who called me out of the blue yesterday).  So, for being here only a little over three weeks, things are progressing right along.

I have to commute across Lake Ponchartrain to go to work, as does J.  This means paying our toll and driving the 24 miles across the Causeway.  I love the lake though, and water Zens me out, and I get to see Brown Pelicans and sailboats and can therefore definitely think of far worse commutes.

In and around all of this, J and I have been overjoyed to finally see Saints games.  Since they’re, you know, all televised here.  Ha!  We enjoyed a nice little run of WINS, which started happening right when we got back and saw our first game in a bar filled with like-minded folks all wearing black and gold like we were…we’re trying not to take credit for that.  Bwahaha!  At any rate, we are both ecstatic to be back in the Who Dat Nation, wins or no wins or sporadic wins or whatever the case!

The Louisiana wildlife has also been fun to watch.  One of our first mornings in the house, I peered out the kitchen window at around 7:00 a.m., only to espy a family of raccoons trundling across the back yard. We’ve got some good swampy terrain in this ‘hood, too, and I keep waiting for gators and snakes!  The lizards are the best though.  I remember these little guys from when I was a kid, and I always enjoy spotting them.  Especially when they are being so blatantly lazy! 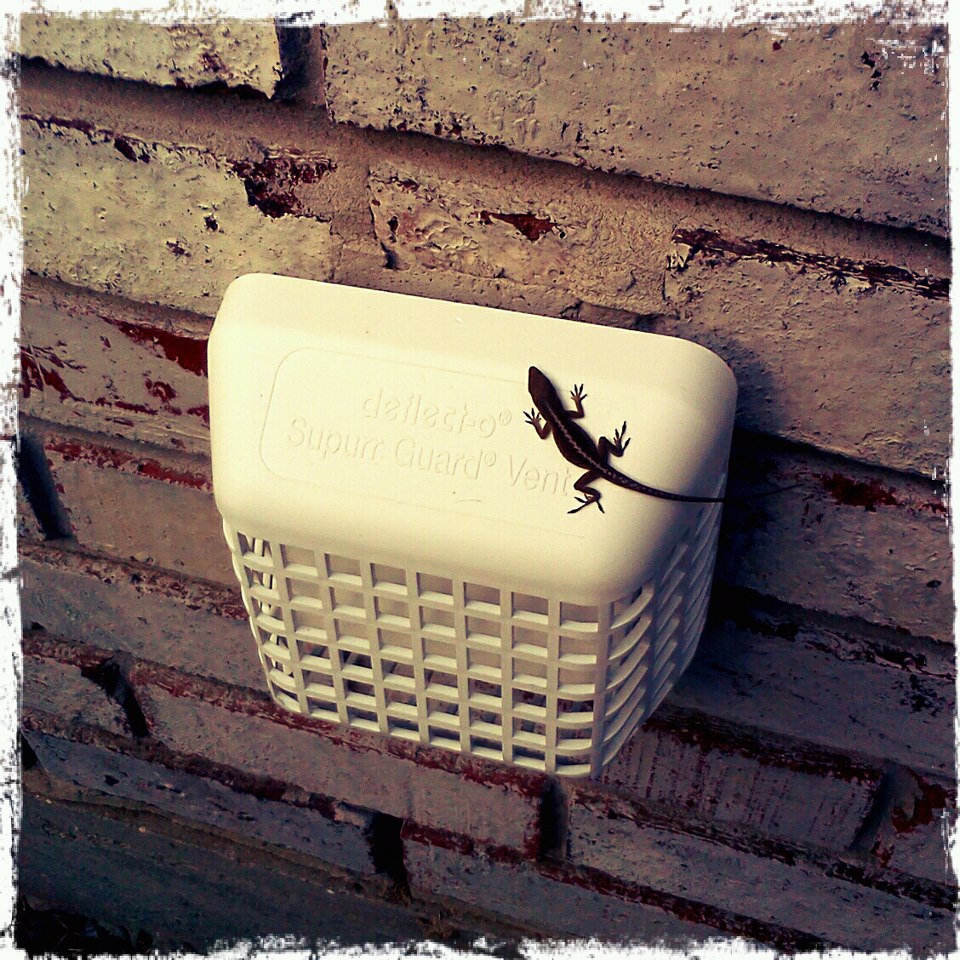 Cootie was running laundry, and I came out that morning to catch this one,
lazing on the dryer vent, all warm and snuggly.  He did not care about my
near proximity one little bit.

We all look at each other and wonder if we’re really here, sometimes – it seems so unreal after working toward it for so long.  Having to leave, earlier this year, has created in me an even deeper appreciation for everything down here than I had before, although I never would have thought that possible.  I take joy in the littlest things: the Satsuma lady and the Fresh Shrimp guy on the side of the road.  The “Cajun” section in the frozen aisle of the grocery store.  The regional books at my bookstore.  The occasional trek into the city for fun, which reminds me that, even though I don’t live in the middle of it YET, it is literally right down da road.  The guy shopping with his kids and reprimanding them to “settle down”…in French.  You know.  The usual.  😉

So dat’s my summary.  Now I can move forward with writing about details.  Like things that have changed, restaurants that have awesome lunch specials, Magazine St. Blues Fest, the cemetery a couple of blocks away from the house.  You know.  The usual.  😉

Featured Image: A view I will never ever ever get tired of.  Ever.