I am writing this from Loveland, where it is HOT and as dry as a potato chip on a sidewalk in Arizona in August.  Some clouds are rolling over, but they are useless and will yield no rain.  If they do, it will be a mere smattering of droplets that will evaporate the precise moment that they hit the pavement.

All around me, Colorado is burning.

It’s happening.  That thing that I have been waiting for – with a huge gaping dread – for years.  The state’s mountains, forests, trees, and the homes that lie therein, are all crashing down in gargantuan heaping piles of flame.  Do a google search for Colorado Fires, and you will see. 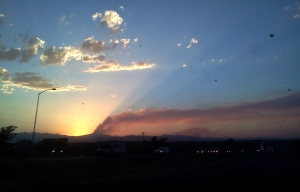 Smoke Plumes on the Mountain, as seen from I-25 this past Saturday.

Now, I am observing as citizens of this state, some friends and acquaintances even, flee their domains in hurried evacuation. Running from the flame and smoke.  Even here, where I sit, the smokesmell wafts in through the windows, ghostlike, day and night, when the wind blows in the correct direction.  Which it usually does.  It parches the throat, assaults the sinuses, and serves as a constant reminder of the turmoil happening just a brief drive up the road.

I have been waiting for this to happen for years, because it has been inevitable for quite some time.  If you have ever been on a pleasant drive through any stretch of forest in Colorado, you will have witnessed the vast and epic mountain landscapes, yes.  But have you ever noticed those patches of red trees amid that sea of green?  Those spots that stick out like a wine stain on your mom’s carpet after you’ve thrown a party that you were not supposed to throw? 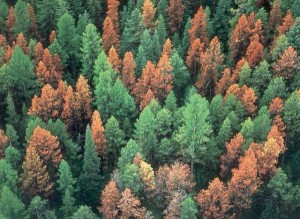 Thank the Mountain Pine Beetle, which has wormed its way into the Colorado ecosystem and devoured 3-million-some-odd acres of the landscape in these parts.  Those red trees are dead.  Dried out.  Driftwood. Fragile tinder for a wayward spark.  Those red patches have been spreading like a cancer for a long time, and the only way for a forest to kill its cancer and regenerate itself, to cull the death and make way for new growth, is to remove it.  To burn it.  Nature, tending to its personal needs as it’s done since the dawn of time.  Like amoeba in a well, us tiny dots upon a tiny dot in the universe, there is very nearly nothing we can do about that.

When the spark is natural, then, one can at least slightly understand.  Take lightning, for example.  If lightning strikes down at random into the midst of a bunch of beetle-eaten tree-corpses and a fire ensues, what the hell can you do?

What is absolutely unforgivable is when that spark is accidental.  When some idiot tosses a cigarette out their car window while taking their mountain pleasure cruise on a 98-degree day during a dry and desiccated summer.  Or ever.  C’mon folks, respect where you are.  I do.

Or when another idiot does a garbage burn in their million-dollar back yard on a windy day during a fire-restriction.

Or when the drunken frat boys take a camping trip and fail to put their campfire out correctly. 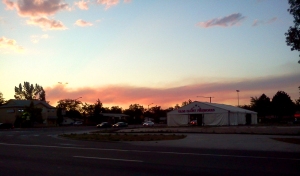 Idiocy in Action.  Smoke Plume behind FIREWORK TENT.
Not in business, here.  Yet.  But STILL.

I could go on.

Stupid-human-induced destruction of beauty is…unfair.  Those things that could be prevented if we tied the morons down and performed a little Clockwork-Orange-Style “training” on the buggers.  But you can’t stop lightning.  You can’t stop nature from doing what it’s going to do, if it has a mind to do so.  And when a bunch of bugs get into several states’ worth of trees, what on earth do you do about that?!

But the mantra of Nature Does What It Will does not make it any easier to breathe the sullied air and be surrounded by loss.  It is heartbreakingly horrifying for the people who have made their homes in what is now the middle of the New Gates of Hell.  And the ones that work nearby, too.  That they have to flee, that the folks on the front lines have to face this.  This is no easier than it was to watch a beloved City flood up to its gills, or another town be blown away in a massive wind.

As I sit in the middle of all of this, trying not to breathe too deeply and feeling like a freckle on the arse of a giant, my thoughts are with this State of Flame.  With both the searing wild places, and with its people.