Wow, it is a very eye-droopin’, hazy-faced, sleepy sort of afternoon.  It is a bad sign, when I bust out the coffee cup at 3:00 p.m.  I try not to do that too often, makes it hard to unwind in the evenings.  However, I have two more hours of work to survive…and I have a massage scheduled this evening, so I do not foresee unwind-trouble being an issue.

Before I got so downtroddenly sleepy, I managed to find a break in my workstream during which I walked down to the corner store and back.  It is a beauuuutiful day.  Reasonable temps, none of that blasted wind, shiny sun.  It’s hard to believe that tomorrow, it will be in the 30s and spitting snow again.  I’m still in denial.

Anyway, I passed by the Malo Mansion on the way down da street.  I barely saw the very-pretty interior from the foyer, once, many a year ago, when I went over there to deliver a work-related-something to someone.  They just finished remodeling the entire inside, lately.  I’m curious about what it looks like now.  Alas, the work-related-someone no longer inhabits the offices there. 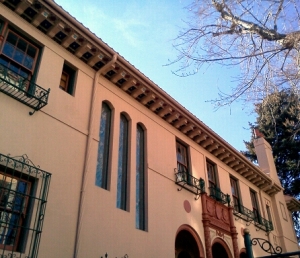 Next up down the trail was the Governor’s Mansion, which I’d stated not too long ago that I’d ceased to notice since I walked past it all the time.  So, today, I noticed it on purpose.  The place is surrounded by a brick and iron wall.  Through the iron gates, one can see a stately but somewhat cute little gazebo, and a bunch of lush-looking flora.  Our former Gov. had a sense of humor, to boot.  There were pink lawn flamingos everywhere.  When the changing-of-the-guard occurred, the flamingos took flight.  I miss those flamingos. 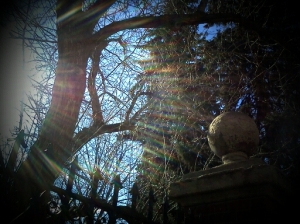 I glanced down and noticed I was being stalked by a very tall, Halloween-esque tree.  I prevailed, and survived the encounter. 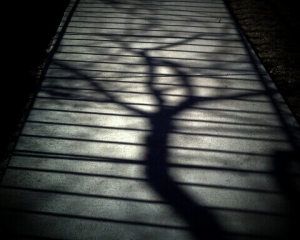 Whew.  Oh, and here’s the flamingoless Mansion itself, from the perspective on that side of the street. 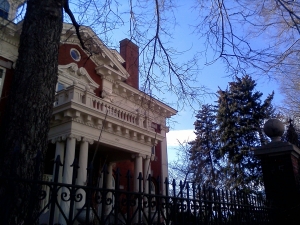 Uneventful walk down.  I shared an uncommon large grin with a stranger as we passed each other by on the sidewalk.  That doesn’t happen often.  Perhaps it was the beauuutiful weather.  Or perhaps we shared some sort of invisible common vibe.  She had on a pair of most-excellent plaid tights that I would seriously wear myself.  The invisible common funky-person vibe.  I could dig that.  It was nice to be smiled at.

At any rate, I made it to my destination.  My last half-block, I was stuck behind two slow people.  I should have added that to my rant on “sidewalk etiquette” the other day: Being Stuck Behind Slow People.  This situation is not so bad, when it’s just one person.  One can slip around them and keep on goin’.  However, when there are two, it becomes more challenging.  I wasn’t in any hurry today, necessarily, but my legs are long and I have a naturally-quick stride.  When we hit the crosswalk, I circumnavigated around them, and went into le store.

They walked in about 2 minutes behind me.  I proceeded to bump into them the entire time I was in there, those two were quite the Path Blockers today, in all respects.  Good lawd!

Purchases made, and now Slow-Person-free, I began the trek back to work.  The return trip is always slightly less relaxing, as it is uphill the entire way.  No matter.  I stopped at the base of the hill to snap some shots of a most lovely little restaurant, Le Centrale.  It is a great little French place.  Their pain perdue is to die for.  Come to think of it, I’ve not been there since Valentine’s Day last year.  Hmm!  Hand-painted wine bottles line the exterior.  Complete with reflections of the street behind me. 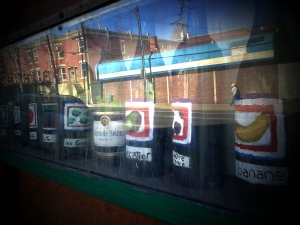 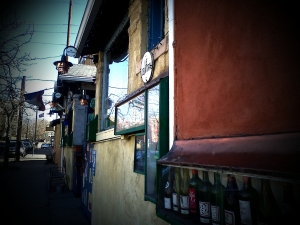 While snapping that last shot, I got yelled at.  No, not by a protective proprietor, but by the homeless guy on the corner behind me.  This corner is a popular one with the denizens of Denver Below (thank you Mr. Gaiman).  When it comes to these folks, I function solely on vibe.  Do they weird me out?  Or do they feel genuine?  That sort of thing.  There has been many a day, especially over the peak summer months, where I have continued on my corner store run, and returned to bring them water or sodas or something to eat.  I don’t carry cash, so that’s all I can really do.  Unless they want a cig or something.  Anyway, most of them have the OK vibe.  The guy holding the corner down today, though, did not.  So I did just what I do to other people that rub me the wrong way: I ignored him.  And took my photos.  And he started flapping around and yelling at me.  Whatever.

Thoroughly nonplussed, I continued my vertical climb.  Haha.  This is the Governor’s Mansion, coming from the other way.  No flamingos on that side either.  *Sigh* 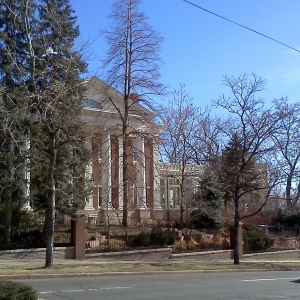 I must be a crazy-magnet today.  After getting yelled at by the first guy, I figured I’d put in my quota for the month.  Like I’ve said before, I have a fairly decent rapport with the more familiar faces on the street.  This city can be pretty transitional though, and there are apparently new faces around.  I didn’t get yelled *at* while passing in front of the Gov’s house, so much as yelled *to*…but I’d have to undergo some sort of hypnosis translative technique to figure out just what he was yelling.  But he was flapping around, like the other guy.  Lots of flapping going on today!  I veered off through my work gate, and inside to put my schtuff away in my office.  And that was that.

But then I went out for a smoke and, looking down, discovered a very randomly-dropped piece of wrapped hard-candy on the ground.  I picked it up and relocated it at our interior work gate.  For Papa Legba. 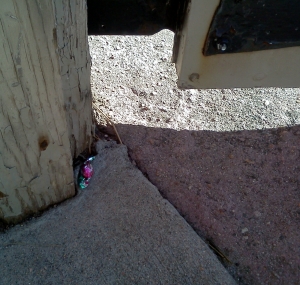 He still seems to be hanging about, after his last showing.  That works for me.  Keep dem Gateways open Papa, I need all the help I can get! 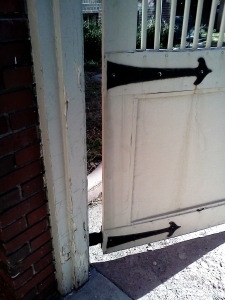