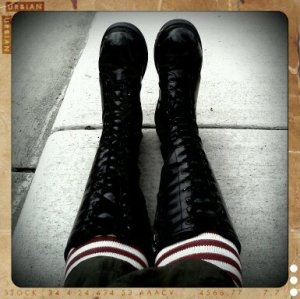 I have been experiencing complete moments of silence this morning. Right now, the folks nearest to my office are whispering, the phones aren’t ringing, and there was a brief lull in the traffic outside my window. Earlier, I was out back and had that same sort of lull. Even the birds stopped chirping. These moments of silence only last about 5, maybe 10, seconds…but living in the city, I’ve found that they are priceless.

I’m finally back online today, after a week of my own silence. Sometimes you just have to unplug. This time, it began with an emotional need to shovel my head under the sand and deal with my own self for a while…and then turned into a physical need, as I came down with a whopping case of The Crud. I’m sick of being sick. It happens often, and lays me out every time. I’m not an unhealthy person, for the most part, but if something germy even looks at me funny, I catch it. Perhaps it’s overexposure, due to work, in combination with my ceaseless wanderings through all the frozen air. Who knows. At any rate, I’m feeling better today after some time off which included a much-needed peaceful weekend.

I was off from work all day on Thursday. In my cold-medicine haze, buried under a mound of blankies, I watched the original Swedish films based on Stieg Larsson’s The Girl With the Dragon Tattoo and The Girl Who Played With Fire novels.  I was not quite finished with The Girl Who Kicked the Hornet’s Nest, so I have not yet seen that one.  However, I devoured (as in, “OMG I CAN’T PUT THIS DOWN!”) that last one over the weekend and finished it yesterday, so that will be next.

I was delighted to see some of my favorite books living on the screen, and thought they were rather well done and enjoyed them immensely.  Lisbeth was well cast, I adored her.  Blomkvist’s casting didn’t capture me as much – he didn’t seem to come across *quite* how he was depicted in the novels, somehow.  Mikke is supposed to be this lady’s man, of sorts, a compelling guy that everyone seems to be drawn to.  He was alright, but I didn’t see IT.  I’ll chalk it up to a cultural difference in aesthetic and call it good.  Overall, I would easily watch them again.  I wonder, though, how they come across to someone who has not read the books.  I kept trying to put myself in that position to see if the stories would have the same effect on someone who had not read them prior to watching the films.  From what I could discern, I think they might have a different feel, sans prior reading.

What captivated me the most, in the books, was the internal workings of the main characters’ minds.  The fact that the world viewed Salander one way, while the reader is able to see how she actually thinks, for example.  Or how there are all of these mysteries to be solved, things to figure out, details to parse…and the methods behind which various characters go about pulling that off.  When you read these stories, one gains a window into the inner workings of the minds of these people.   And boy, do I love the mental inner workings.  I’ve always been fascinated by puzzles…big puzzles, crimes, investigative research, Finding Things Out that No One Should Be Able to Find Out, and the computer-hack-information-junkie angle never hurts with me, either.  While I was reading, through all three books, my brain was on fire.  I didn’t glean that from watching the films, but then again, that’s par for the course with a visual medium, sometimes.

In summary, I can say that I enjoyed them, and look forward to watching the final one out of that set.  Despite being sick, I’m grateful for the downtime to be able to watch the first two back to back, particularly now that the American version of the first story is out.  I wanted to see the Swedish versions first, especially since that is where the novels are set.  I wanted to hear the characters’ words, in their own language.  I was happy to note that I’d been reading all of the names of people, towns, and streets correctly…quite the linguistic exercise.

I never realized how soothing Swedish is, though.  As I lay there, hazy and buried under my mound of blankies, I found myself repeatedly jolting awake and having to rewind to catch what I had missed.  Their conversations had lulled me sweetly to sleep.